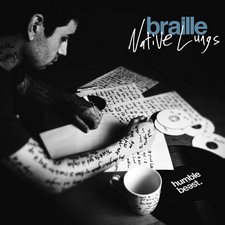 In 2008, hip hop artist Braille got a chance to put out his fourth album, The IV Edition, to a wider audience through Syntax Records. It gained him a bigger fanbase as he went back into the independent music realm after its release. In 2009, he teamed up with a producer named Symbolyc One for a collaboration called Cloud Nineteen, and a year later, Braille released his solo album Weapon Aid. For his seventh studio album, this time through the Humble Beast imprint, Braille teamed up with several Portland-based DJs, producers and emcees for a free album called Native Lungs.

My first experience with Braille was with The IV Edition, which was a pretty solid effort, but didn't really hook me too much. His succeeding albums gave me a lot more respect for his artistry. Listening to Native Lungs, I'm not so sure he's not one of my top emcees at the moment. This release is top notch hip hop that turns Braille into a force to be reckoned with. The beats are out of this world, with excellent production work from a slew of producers - DJ Official (who frequently tours with Reach Records artists), Evidence from Dilated Peoples, Symbolyc One (who produced big singles for Kanye West and Beyonce since the release of Cloud Nineteen), as well as Humble Beast artists Odd Thomas, Xperiment, Theory Hazit and Braille himself. Not to mention several other guys that I'm not entirely familiar with, but whose work is noticeably brilliant on their respective tracks. Some beats have the west coast vibe, like the opening track, "Native Lungs." Then there's "We Will Remember," which has a bit of a darker beat; "Storm Trooper" is almost like Run DMC meets Braille (an old school beat courtesy of Theory Hazit); then Xperiment throws a weird beat into the mix for "48 Prisons." It's pretty diverse as far as hip hop goes, but even with the big mix of talent spread out all over the album, Native Lungs is still a cohesive album.

One of my favorite beats from Native Lungs (possibly my favorite) comes from DJ Official on "Spell Check." It's hard to explain what I love about it; it's almost like a transformed 8-bit track turned into a semi-gangster track. And then Braille comes in and just works it so well. If you're not sure about getting this album, "Spell Check" may be the one to check out. "Nightmare Walking" is produced by Trox, who gives it a sound similar to Braille's "Raise the Dead" from The IV Edition, albeit with a more refined sound (plus, it's not nearly as creepy as "Raise the Dead"). For the closing track, "Finally Arrive," DJ Cassidy brings a slower beat that sounds both west coast style as well as thoughtful and reminiscent. Other than the percussion side of the beat, it's composed of beautiful piano and some strings. Braille did an excellent job assembling the crew of producers to make Native Lungs an album full of exceptional beats.

While Braille was responsible for some production (namely the song track "We Will Remember"), his main role was providing nearly all the raps. "Death In Me" features guest vocals from Theory Hazit and Odd Thomas, and Braille's daughter Gabby makes a couple short (and cute) appearances, but the rest of the vocals come from Braille. Native Lungs is easily his best work to date. Not that his past albums weren't good, but each time he puts out a new album, he seems to have gotten better, and there's no exception this time around. He flows smoother and, at times, raps harder than he ever has. Like I said before, he worked the beat of "Spell Check" excellently, and verses he provides in "Feel It," "Storm Trooper," "48 Prisons" and "DeepRest" are nothing short of terrific. Not only has his vocal work improved once again, but his lyrics are the most personal in these songs than previous songs. Topics range from growing up and trying to get into the hip hop game in "Native Lungs" ("Let me pick up where I left off, a few years after Hammer pants and Kris Kross, I took it serious, notebooks, pencil lead, flow a wicked beat like a needle and thread, needle to the record, freestylin' in my room, no audience, lettin' the bass go boom for the love of it, and that's the native lung of it, back then I never knew what would become of it"), the struggles of trying to run an independent record label (Hip Hop IS Music) that he eventually had to shut down in "Storm Trooper" ("Bring it back yo, let the beat pound, I had to shut my own record label down, could not afford postage for the mail, too many CDs not enough sales, that's how it goes and that's how it is, struggle to survive in the music biz, never been afraid to step up and take a risk, teamed up with Humble Beast now we do it like this") and his immense love for his daughter Gabby, along with the hardships of raising her as a single parent, in "Step Up" ("And I'm looking at her baby pictures, how could I drop her off at a babysitter, man I'd just rather be with her, I can't go for that (I'm on my Hall & Oates tip), she was nodding her head to the beat when I wrote this, I wanna guide her with compassion and wise words and never criticize her, offer correction when she whines and complains, but also take time to explain, train up my child to the best of my ability, wisdom from God is what I really need").

2011 has been a pretty surprising year for music, with a lot more having been released than expected. Among them have been some good, some bad, and some great. Native Lungs? Great. It's definitely one of the best to be released thus far in the year, and is possibly in the top five hip hop albums. You can download the album for free at the Humble Beast website, or buy a physical copy from the Sphere of Hip Hop store. Either way, if you enjoy quality hip hop, you have no reason why you can't bump this one if you haven't already.