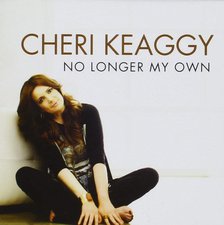 Cheri Keaggy
No Longer My Own


If Cheri Keaggy's preceding album, 2012's So I Can Tell, nudged the California native toward the periphery of the musical ground inhabited by the ranks of Aimee Mann, Cindy Morgan and Amy Grant, her latest release, No Longer My Own, continues that trend; solidifying her spot within their ranks. Like those artists, Keaggy began her career singing catchy, radio-friendly pop songs before eventually branching out to create more unique and substantial works.

In the broadest sense, Keaggy's latest effort could probably best be described as her piano album. Although there are certainly a handful of cuts on the project that don't fit that category, and much of the piano-based material does feature other instruments, its most striking entries are nevertheless based around a foundation of Keaggy's sturdy vocals and prominent keyboard accompaniment.

"No Longer My Own" is easily as beautiful and awe-inspiring as any radio ballad in recent memory. "You Go Before," a first cousin to both the Eagle's "Desperado" and Elton John's "Someone Saved My Life Tonight," proves that a truly grand piece doesn't have to be overly complicated. And the standout "Jesus, One and Only" travels in a straight line from "If These Walls Could Speak" from Amy Grant's absolutely transcendent 1987 Lead Me On record.

The non-piano-driven tracks tend to fare less spectacularly. The pop ditty, "Lucky to Be Breathing Your Air," although hardly a complete misstep, nevertheless comes across as slightly lightweight. "Be My Sabbath" is hampered by its meandering, largely run-of-the-mill rhythm and slightly clumsy lyrics. The mandolin-driven folk piece, "Whatever Is True," comes across as a bit paint by numbers. And even a handful of the piano ballads, including "I Love Your Company" and "Lead Me to Your Love," tend to be either precious or cloying.

Its weaker material notwithstanding, the album is blessed with a loose, jam-session sort of quality about it. While this sort of approach can often wind up submerging the best of releases, the more savvy members of the listening audience will find that No Longer My Own's unfussy, take-me-as-I-am aesthetic isn't so much a liability as it is a testament to its creator's confidence in the work they're committing to tape. Indeed, this is an album that, even in spite of its shortcomings, demands to be taken on its own terms, which, perhaps more than any other characteristic, renders it such a winning, albeit somewhat flawed, proposition.