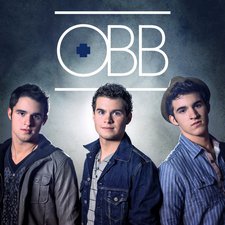 Recent Curb Records signees, OBB (Oswald Brothers Band), have hit the ground running. This band of brothers (literally, they are all biological brothers) have been blessed with success at a relatively young age; they've recently wrapped up the 2013 Winter Jam Tour Spectacular, and while on the tour they released their debut, a self-titled EP.

OBB's eponymous EP is comprised of six tracks, all written or co-written by the three brothers, and offers the listener mellow pop tunes that will be sure to find a home on CCM radio. Their opening song, "All I Need Is You," is a catchy number, and introduces the listener to what OBB sounds like, and what they should expect from the rest of the EP. The second song on the track listing is "Come On Home," which is also their lead single, and it continues on the same path as the previous song. Again, it's very mellow and sounds similar to the first song, but regardless, it is still catchy and it will probably do very well on radio. "Song of a Savior" and "Through His Eyes" offers about the same dose of tempo and chord changes as the previous songs, and keeps the ball rolling nicely. "Wildfire" changes the pace a little by adding some peppiness mid-EP, and is probably one of the highlights of this release. The project closes with an acoustic version of "Beautiful Ride," which is probably the best track on the EP, and ends things on a high note.

With that aside, OBB's debut is a modest effort. It's nothing overly stellar or exciting, but it does what it's supposed to do very well, which is to appeal to the masses of CCM fans and Christian Radio. OBB definitely has potential, and hopefully we will see them take more musical and lyrical risks on their next project.