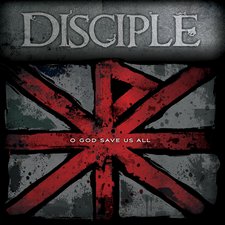 Disciple
O God Save Us All

Disciple has been hard at work for 20 years now and has managed to work their way up the ladder from the indie underground to major player in the Christian rock scene. Since 2008, the band has undergone extensive line-up changes that has left only singer Kevin Young as the sole original member still standing. Despite these changes, Disciple has continued to release solid hard rock records. Their newest effort, O God Save Us All, is no exception, but is, however, a bit of a mixed bag. Half of the record feels like the energizing hard rock found of their self-titled album, as well as Scars Remain, while the other half feels more like the same modern rock heard all over the radio. Thankfully, Disciple is able to pull that radio rock sound off better than most.

The record kicks off with good energy in "Outlaws," a standard Disciple rocker complete with hard rock riffing and screams in the chorus. The song leads nicely into the title track and the first hint of Disciple's older sound, which features some slight metal influences with both the guitars and drums. As "RIP," an album best, starts up, you'll probably be thinking the Disciple of yesteryear is back; hold that thought. The opening three tracks are highly energetic rock tunes, but "Once and For All" gives way to the flip side of the coin. The song is the first of several seemingly built for radio and is reminiscent some older (and slower) Linkin Park. "Someday" follows suit on the slower rock side of things and may sound similar to material recently released by Ashes Remain to some. To even things out at three and three, the current radio hit "Draw the Line" follows.

At this point, the guys decide to try something completely new for themselves. "Kings" is a hard rocker, but strangely carriers an industrial influence. From the industrial sound, they shift back to an almost straightforward metal track in "Unstoppable." The song features some solid riffing and a really good sound. It's one of the band's heaviest songs in a while and even contains a small breakdown. The hardest rock song on the record is followed by two more radio friendly rock songs and the ending love song ballad, "Trade a Moment." The guilty pleasure on the album is likely to be "Beautiful Scars;" it's a song that feels completely manufactured for radio and is completely predictable, but just sounds so good you can't help but love it.

Kevin Young's current Disciple doesn't necessarily hit it out of the park, but they do manage to maintain the norm. When the norm is crafting solid rock records with great replay value, "maintaining the norm" isn't such a bad thing; it's no wonder Disciple has been around so long. While "Draw the Line" was expected, the influx of additional radio rock songs was not. Fans of harder rock than typically played on the radio, and fans of radio rock alike, can find common ground on this record. O God Save Us All probably won't end up as the favorite album of most fans, but it still contains plenty of material to whet your hard rock appetite.

Disciple continues to rock stages year after year. I feel like I say that with every release, which is impressive since they've been around for almost two decades now. So, what's one to expect from "O God Help Us All?" Exactly the same Disciple as always: some solid hard rock tunes mixed with a healthy dose of ballads. Though it may not carry the lyrical depth or stellar musical creativity of other acts, it can keep your head bobbing all day long.

The first handful of tracks - "Outlaws," the title track, and "R.I.P." - are all hard-rocking and exactly what Disciple fans are used to. The focus of the album is completely Christ-driven and delivers a message that's great for all listeners. Of the handful of ballads, "Draw The Line" and "Beautiful Scars" are the most note-worthy, and depict life's journey and the transforming power of Christ.

In the end, this is what Disciple is known for. Is it going to be played all over Christian rock stations? Absolutely. But will it be the most mind-blowing album you've heard this year? Definitely not. Fans of Disciple will not be disappointed, but I don't except the band to garner any new attention with this release. - Kevin Hoskins, 10/27/12