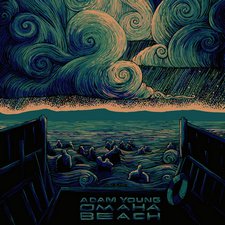 Adam Young
Omaha Beach: Into the Jaws of Death


Following the intense, yet rather monotonous Everest soundtrack, which felt rather drawn out and tiring, Adam Young expands his musical prowess, with his June release, Omaha Beach.

The soundtrack is based on the events of June 6, 1944 as the allied powers had to take Normandy beach in order to gain an important foothold against the Germans midway through World War II. The attack didn't go as planned, and when the smoke cleared, over 3,000 troops were dead, missing, or captured. Even though the carnage was staggering, the allies had won and were able to gain a needed win, moving towards victory.

The first track on the record, "H-Hour" is a heroic and resounding movement, and the instrumentation is a driving force toward what the allies must have thought the attack would be. Large brass, heavy percussion and a bit of piano really set the scene for battle, and the whole song bleeds pride and patriotism. If "H-Hour" was commanding and ready, "Seasick" is a precursor to the true massacre that was about to ensue. Heavy synthesized waves of metallic sounds give the track a terribly foreboding feel, along with static and percussive thunderclaps that make the listener feel as though they were onboard one of the landing boats. The track is weighty and made me anxious and sick the first time I listened to it. However, the underlying piano at the end is a beautiful touch, and really represents the hope and heroism that still must have existed in the hearts of the soldiers before hitting the shore.

"On the Beach" is the fourth track, and it wastes little time before throwing the listener into the action. Heavy strings push the song forward, and a sense of confusion and fear lay heavy in the foreground. Near the end of the track, the music slows down, leading to a single harp and the sound of cannons and gunshots pounding in the background. The end feels strangely lonely, and reminds me of "Lifeboats" from RMS Titanic.

Any peace lingering from the final bit "On the Beach" is immediately ruined by metallic dubstep drops and angry strings in "Bloody Omaha." Perhaps the most sickening piece of music I've ever listened to, the track feels horrendously bloody and disgusting. Though it's not a pleasant track, Adam really makes the listener feel as though they were on the beach, and pays tribute to the terror, anxiety and adrenaline that must have been running through each soldier's head that day.

"The Cliffs" slows the tone down a bit, but still retains the terror and foreboding of the attack. Synthesized percussion is made to sound like machine guns, and strings give the impression of the bloody beach in the background. Another moment of hope flows through this track though, and the listener is given another brief moment of peace near the end of the track, as the harp and piano return. Through the second wave of attacks, "Troops Advance Inland" drives up the cliffs, into the final assault of Normandy. The dubstep-esqe drops of simulated bombs still linger, but an air of hope and totality remain.

The attack on Omaha finally starts to wrap up with "Reinforcements," a triumphant, yet heavy anthem. The fighting is over. The final wave of troops have arrived, yet there is still work to be done. Midway through the track, the strings stop, and the listener is left with piano and the sound of the wind and water, perhaps reflecting on the true price of victory. The final song, "The Longest Day," is a tribute to the lives that were lost in the battle. French horns and violin lay heavy on the track, and give the song a real sense of honor and morbid reality. The attack (and eventually the war), had been won at a high price.

If a composer of a soundtrack is supposed to give emotion and feeling to a certain event, Adam Young excels. Omaha Beach, though not the prettiest score, may capture the scene of what the beach was like in the realest way. Every single aspect of the battle is made to play a role in the soundtrack, and it truly shows through the talent of Young. If you get a chance, pick up Omaha Beach (it is free on his website, or you can support him directly through a purchase on Amazon or iTunes), close your eyes, and spend a brief time experiencing the price payed for victory, through the lens of music.

D-Day is the topic of Adam Young's 5th soundtrack project, and probably his first one where he deals with a topic that was not just difficult, but truly ugly. As such, the music contained within this soundtrack is, for the best intents and thematic purposes, ugly. Listening to Omaha Beach is an experience that one must brace themselves for lest they be lured in by the dramatic-yet-straightforward opener "H-Hour" only to be thrown for a loop by the atonality and distortion of "Seasick." That track brilliantly mixes anxiety and peace, all the while the creaking, rocking motion of the transport plays out in the extremely distorted guitars and drums. "On The Beach" and "Bloody Omaha" add an element of blood to the distortion-filled-chaos before the less-ugly next three tracks bring the listener past the climax to end the narrative portion of the soundtrack. Finally, the nostalgic "The Longest Day" brings some beauty to the project, and ends the soundtrack on an uplifting note. It does take a certain mood to listen to Omaha Beach all the way through, so I'm not sure how it will stack up with replay frequency, but no one can say Young didn't hit a home run with a musical depiction of D-Day. - 6/13/16, Mark Rice of Jesusfreakhideout.com