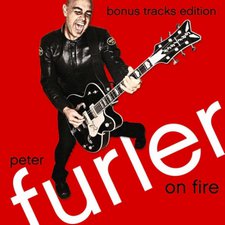 When Newsboys had announced that Peter Furler was leaving the band, devoted fans figured that it may be the last we'd ever hear of the Aussie's signature pop vocals. But much to the surprise of fans (and the Newsboys themselves), Peter returned to music last summer with his debut solo album, On Fire. Free from the stress of keeping the Newsboys hits rolling one after another, there's a sense of freedom you can even hear in the worship-centered sounds of On Fire. In January of 2012, the label re-released the album as a digital "Bonus Tracks Edition," giving Furler fans more new music and those who've yet to take the plunge more of an incentive to make the purchase.
Digital re-releases, overall, seem more courteous to the music buyer than strictly physical re-releases (or digital versions with the notorious "Album Only" purchase option). If you have the record already, it feels like a dirty trick to be forced to buy the album all over again just for a few extra songs. Thankfully, On Fire: Bonus Tracks Edition allows music buyers to grab the five extra songs separately from your digital retailer of choice. In that way, these extra songs play out nicely as a separate EP of sorts. EPs were conceptually intended to be extensions of a longer record, so the extras on this edition make sense as an EP. If you grab these tracks, what you'll find is one previously unreleased b-side, one remix, and "acoustic versions" of three songs on On Fire. First off, the b-side, "Water To Wine" is a fine addition. It captures a bit of a Newsboys vibe, but would have easily fit on On Fire as a twelfth track. It's catchy, driven by electronic accents and a bit of auto-tune, but Furler's vocal delivery is signature Furler. It's then followed by a remix done by DJ extraordinaire Andy Hunter, who is globally known for his work. The On Fire opener, "I'm Alive," was chosen for the remix treatment and Hunter does a nice job, although I have to admit I expected more. Hunter has produced some pretty incredible and funky techno tracks, but his treatment of "I'm Alive" is pretty tame. Afterwards, the bonus tracks take a turn with stripped down and more intimate versions of three worship songs from the regular album. Some of the tracks are more stripped down than others; it's seldom just Furler and an acoustic guitar (although I'd have been really interested to hear just that). We still hear some synths and percussion mixed in at times, but it's just simplified enough to still be considered "acoustic." "Matter of Faith" gains some real intimacy in its more simplistic form as parts that rose to anthemic heights in the original feature more hushed vocals from Furler here. But "Glory to the King" may be the gem of them all. With Furler's toned-down vocals and an acoustic guitar at the forefront, the beauty of this original worship song really shines through. It's a lovely arrangement and one that Sunday morning worship leaders should consider adding into their services.
On Fire was a welcomed return to music for Peter Furler and while it may not be the best thing the vocalist has leant his voice to, it's a a worthwhile pop album and a refreshing worship record. The extras offered on On Fire: Bonus Tracks Edition are definitely worth downloading separately for fans who already own a copy of the original album, while those who have been meaning to grab On Fire can get some great extras with this fine digital re-release.
- Review date: 2/21/12, written by John DiBiase of Jesusfreakhideout.com