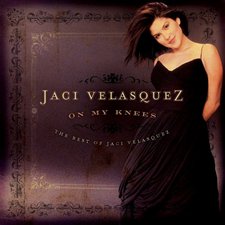 
If ever there was an artist deserving of a greatest hits collection, it would have to be Jaci Velasquez. To be sure, with five Gold and three Platinum albums, sixteen chart-topping singles spread across the Inspirational and Latin Pop charts, and a veritable slew of GRAMMY, Dove and Billboard music awards to her credit, one would be hard-pressed to name too many currently-active Christian pop singers with a more impressive curriculum vitae than 1997's Dove-winning New Artist of the Year.

In strictly historical terms, On My Knees: The Best Of Jaci Velasquez does an admirable job of chronicling Velasquez's musical history, featuring twelve of her fourteen Number One English-language singles, a pair of latter-day cuts and three songs from several various-artist compilations. That being said, the Best Of project doesn't include any previously-unavailable material, and two tracks which hit the top slot on the CCM charts, "Flower in the Rain" (from the debut) and "Glory" (from the self-titled second effort), aren't featured here. Even so, at nearly 20 songs, even a few long-time fans will run across something they haven't heard yet. And given the strength of "I Will Rest in You," from the Streams multi-artist project, the exclusion of "Flower" and "Glory" becomes less of a sticking point than it otherwise might be.

Interestingly enough, though, the record's longer run-time, while generally an asset for hits compendiums like these, does serve to highlight Velasquez's migration from the ingratiatingly peppy dance-friendly strains of her earliest offerings into the less engaging soft-pop fare that came to dominate the releases that followed. This weakness is only highlighted on the back third of the hits collection, as languid, largely run-of-the-mill, adult contemporary-leaning ballads like "Adore," "Just a Prayer Away" and "God Loves You" (from the Touched by an Angel soundtrack) are placed one behind the other in the running order.

In fairness, even the weakest numbers are blessed with a sparkling, full-bodied production aesthetic that equals, or surpasses, that of most of what the average listener hears on inspirational radio. And Velasquez's undeniable talent elevates the album, as a whole, to such a point that even those who have come to dismiss Christian pop as nothing more than a pale shadow of its mainstream counterpart will be forced to admit that the powerhouse vocalist is more than able to hold her own with virtually any singer in either camp. For those unfamiliar with Velasquez's career arc to date, the On My Knees anthology, even with its proliferation of weaker material, is as good a starting point as any from which to begin their investigation. For everyone else, though, her triumphant first two records remain, far and away, the most cohesive and convincing installments in her catalog to date.