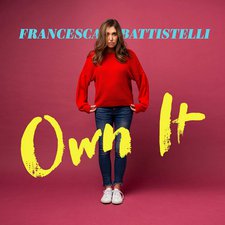 Francesca Battistelli
Own It


On the music scene now for a decade, veteran pop artist Francesca Battistelli returns with her fifth full-length release, titled Own It. Known for her catchy radio pop, she delivers more of her signature tunes with a few artistic growth steps to keep things fresh. Much has changed since her major label debut, My Paper Heart, released in 2008, including marriage, multiple kids and various hit singles and awards. Her goal with the album was to encourage her listeners saying, "These songs are so empowering. What they represent to me is my desire to own my identity in Christ, to kick fear out of my life, to own the present moment and not live in the past or even the future." So does Own It accomplish its mission? The answer is yes, and she does so with a little help from her friends, as she wrote or co-wrote nine of the ten tracks with many of Nashville's songwriter elite, like Matt Maher, Mia Fieldes, Jeff Prado, Molley Reed, Ellie Holcomb, Seth Mosley and Josh Brownleewe just to name a few.

Lead track and first single "The Breakup Song" kicks things off in style with finger snaps, doo wop backing vocals, and triumphant horns, proclaiming the lyrical sentiment that, "fear you will never be welcome here." It's a clever turn of phrase that was co-penned by MercyMe's lead singer Bart Millard and David Garcia. "Love Somebody" uses an 80's / early 90's pop feel for a nice change of pace musically. "Royalty" utilizes familiar finger snaps as it reminds us that as God's children we are, "no longer orphans/now sons and daughters/worthy and wanted/we belong." A strong crisp back beat begins "This Could Change Everything," as Francesca earnestly sings, "This could change everything/can you feel it now/something's in the air/this could change everything/I know we're gonna know it when we get there/no more waiting on taking the chance/this could change everything/let it begin." A chorus of voices adds to the intensity in the bridge, further enhancing a strong song. The second best song of the album goes to the stirring "You Belong." It nails the thesis of the album perfectly stating that, "You belong/the whole world is waiting, no one else can sing your song/you belong/the lie that's been chasing you/love's gonna prove it wrong/open your eyes/breathe in the light/you don't have to hide/you belong." It's an emotional, uplifting, and ultimately empowering song that hits all the right buttons for a hit single.

Slowing things down for "As Good As It Gets," Battistelli does her best Carrie Underwood impression, and though it contains a heartfelt message, the song itself does little to stand out, perhaps suffering from song placement after "You Belong." A ticking sound reminiscent of a clock, pushes "Let The Light In" forward in the verses as she sings to herself (and to listeners by extension) that, "this is a song to remind me/we've all got some broken we're hiding/none of us are okay/we all fall/we all break/this is a song to remind me/to let the light in." Flairs of an EDM drop follow the chorus, adding some new musicality to her palette, and it works to support the song without distracting. "Defender" features a guest vocal from Bethel Music's Steffany Gretzinger, and would fit right in alongside songs from the singer's solo offering, Blackout. Unfortunately, both "Defender" and "Freedom" end the album with two of the weaker tracks as both have excellent lyrics that get drowned out by bland musical approaches. However, this is just a small criticism that likely could have been remedied with different song sequencing.

All in all, although there are a few songs that blend in, or run too long, this is a fantastic album sure to please fans old and new alike. The cohesion of the message of belonging, and the musical growth steps serve to keep Battistelli moving forward creatively, all but ensuring that this won't be the last we hear from her, and that's a good thing.