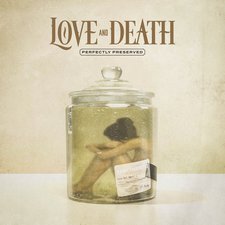 
It's been a long eight years since Love and Death released their debut album, Between Here and Lost. While that album was quite impressive to me upon release, the luster wore off just a little bit over the years. The band's lineup has changed since then, with only Brian "Head" Welch himself and guitarist J.R. Bareis (now also playing in Spoken) returning. Head recruited acclaimed producer and Breaking Benjamin (and former RED) guitarist Jasen Rauch to play bass and Phinehas drummer Isaiah Perez -- making Love and Death a bit of super group at this point. On top of these changes, they also brought in Lacey Sturm (of Flyleaf fame), Breaking Benjamin's Keith Wallen, and Righteous Vendetta's Ryan Hayes for guest spots. These influences have certainly affected the band's overall sound, and the addition of Bareis on vocals alongside Head was a smart choice.

After the dark and moody piano opener of "Infamy," L&D jump to the heavy and riff-driven "Tragedy." Brian's own desire to insert melodic elements into his music, along with the additional songwriters of Rauch and Bareis, really opens things up. The intro riff, the bridge, and outro hit so hard, but the chorus opens into such a big singable and catchy sound. This theme of coupling heavy nu metal riffs with big Breaking Benjamin-esque melodic choruses plays throughout the album. "Down" is another great example of additional songwriters influencing the sound and direction of L&D. Perhaps the most shocking thing on a nu metal inspired album is the inclusion of a DJ Snake and Justin Bieber song. I mean, nothing says nu metal and hard rock like Bieber, right? J.R. and Lacey Sturm take the lead vocals on this, but Head provides some great biting background growls throughout the track. While the DEVO cover from last time was fun and crazy, "Let Me Love You" actually comes off as a great melodic rock song.

"Death of Us" and "Slow Fire" offer up some nu metal goodness that you would expect from a legend such as Brian "Head" Welch, but they still retain that melody. "Lo Lamento" was released in 2016, -- which led fans to believe an album was forthcoming -- but it has been re-tooled and re-recorded for this album. A side-by-side comparison will really show the improvements made to the track. "Affliction" is likely the closest sounding song to something that may have been on Between Here and Lost. That pre-chorus highlights some of Head's best qualities as a front man, but the bridge/break is just nasty; it's an album highlight. The album's closer was the second single (not counting 2016's "Lo Lamento"). "White Flag" is one of heaviest and most nu metal influenced songs present, but even it features a big melodic hook. Lyrically, it's a great song to cap off the album's theme of overcoming and not giving up during difficult times. Ryan Hayes let's in rip in the breakdown with, "Believe me when I say that I was born for this; gave up it all for this. Nothing in the world in the could stand like I stand for this.; stay strong to the end of this. And I know you're scared of this; take the fear and power and conquer it. We'll never raise the white flag."

This type of heavy music mixes Head's nu metal roots with the modern hard rock of Breaking Benjamin. It's not for everyone, but for those who enjoy these two sounds, there's really a lot to love here. With that said, Head's insistence that J.R. Bareis be more involved in the writing process, and getting him into singing, was a wise choice. The injection of youth and perspective that J.R. brings adds a great element to Love and Death and perhaps makes their music a little more accessible overall. However, that accessibility, which can often be viewed as a negative, doesn't come off as forced. Instead, it's very organic and seems like a logical progression if you look at the direction things have been going from Save Me From Myself (Head's solo album), to Between Here and Lost, and now Perfectly Preserved. Great musical and vocal choices, paired with the positive messages of hope in overcoming different struggles, make Love and Death's newest effort a winner and one of the better hard rock album to surface from a Christian band in quite a while. Perfectly Preserved is every bit as good as, if not better than, Between Here and Lost, but it may have a little more staying power.