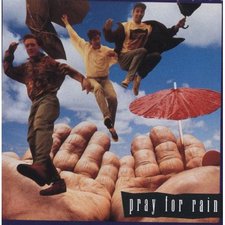 
PFR was a truly a unique band that brought a much needed breath of fresh air to the CCM scene in the early 90's. While the comparisons to the Bealtes sound isn't unfounded, they also tread closely to the stylings of mainstream bands Badfinger and Electric Light Orchestra as well. With their debut album Pray for Rain in 1992 we have a solid beginning to a much too short career as a band. There is much to like but this reviewer find tracks "You Lord", "Do You Wanna Know Love", "Let Go", "Didn't He", "Pray for Rain", and "On and On" to be the cream of the crop.

"You Lord" features a jangling guitar and what would become PFR's signature tight harmonies between lead singer Joel Hanson and guitarist Patrick Andrew. Some well placed guitar licks shortly after the bridge breakdown shake us from the established chugging rhythm and adds interest, and the song ends on a lower key note amidst chaotic handclaps and B3 organ that strangely works well. "Do You Wanna Know Love" begins understatedly with a simple guitar pluck and lyrics only to explode after twenty seconds will full band and vocals into one of the harder rockers in their catalogue. A screaming guitar solo at the two minute mark of the song that is featured in the back of the songs mix until the end is pure rock delight.

The title track "Pray for Rain" is a plea to the heavens for "rain to come and wash away what has made me numb, I pray for a raging storm, to drown the sin in me" and the music matches lead singer Joel Hanson's desperation giving the listener the sense they are pushing forward like a train just in control enough to stay on the tracks. The final song "On and On" is a slow burn as its beginning builds orchestrally with violin and cello present, to a single picked guitar with singer Joel singing what is a simple prayer of praise to God giving Him glory for bringing him this far in his life. The song soars to a close with the following lyrics "Here are my burdens, I lift them up to You, Your words they ease my mind, Your gentleness shines through, giving us hope when hope is all gone, never retreating, sending us on and on." A great ending to a good debut album.

Clearly PFR has a knack for writing memorable melodies and interesting guitar work, with tight vocal harmonies and solid lyrics. While Pray for Rain isn't the best in their discography it is a solid debut that serves as a good representation of what they would hone and perfect on future releases.