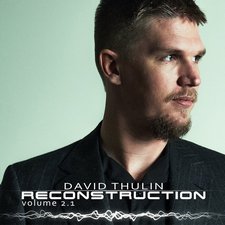 Just two years ago, precious few of us were familiar with the name "Thulin" (pronounced "Tooine"). The name now enjoys widespread recognition throughout the Christian music industry, whether associated with Jonathan or David Thulin, or their sister, Jeanette Thulin Claesson. Jonathan and David's association with Dream Record's "Press Play" has also earned them even more fame after #LITO's release back in October. While Jonathan's work has focused on deep (oftentimes sorrowful) and introspective songwriting, David Thulin has proven himself to be skilled with the dubstep, dance, and of course, remix approaches to musicianship.

His latest offering, Reconstruction Vol. 2.1, is a continuation of Reconstruction, released less than a year ago. Vol. 2.1 consists of six tracks, one of which is original. Remix work (and coadjuvantly, writing reviews) is always a little tricky when the remix work is not created by the original artist. The question at hand, essentially, is "can a great remix of a bad song create a good song?" Sadly, this question may be asked a few times by some of Vol. 2.1's listeners.

Thulin opens his album with the one original song, "Light in Me," performed by Nicole Croteau of Press Play. The lyrics themselves are a little sloppy ("I see a flash at the speed of sound, my feet start coming off the ground"), but the melody retains a tight grip and Thulin's technical work shines through. David Thulin's remix of "Architecture" (by brother Jonathan) is very well done, and is the epitome of a quality remix. The song itself doesn't significantly differentiate from the original, which is probably a good thing.

Press Play's "Love Audio" is ultimately improved by Thulin's work. He gave the song a more energetic and upbeat feel, building on the one aspect which the original song had going for it to begin with. Shine Bright Baby's "Beautiful Love" failed to please from the get go, and Thulin's magic likewise fails to charm here. The song comes across as completely unmemorable, which is disappointing. Vol. 2.1's nonpareil comes into play with the final two tracks. "In Crowd" by Rapture Ruckus was a good song to begin with, and Thulin is able to draw out its unique sound in a way that pleases the ear and pays homage to the original. His remix of Natalie Grant's "This is Love" is by far the most interesting song on the album, clearly competing with "In Crowd" for Vol. 2.1's best track.

In the end, half the album is in some way connected to Press Play, a band which has received more than a few mixed reviews. David Thulin's skill is made apparent on Reconstruction Vol. 2.1, but he certainly could have chosen better songs to work with. All-in-all, this makes for an average experience that leaves the listener wanting more. As the album's title indicates, however, this is the first of what will be two remix EPs released this year. Hopefully Vol. 2.2 will be comprised of a better song selection, but until then, we can easily appreciate what David Thulin has masterfully remixed.