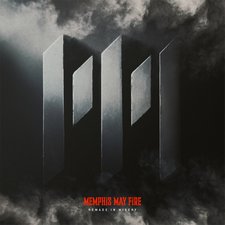 Memphis May Fire
Remade in Misery


If you've kept up with the pre-release singles, you've probably already heard most of Remade in Misery. For whatever reason, Rise Records decided to release nine out of the eleven songs as singles before the album's release. Even the two all-new songs ("Misery" and "The Fight Within") could have been singles in their own right. But even with eleven songs, each between three and four minutes, and each feeling like a single, Remade in Misery stands as one of the most fun metalcore albums of the year.

Highlight track "Blood and Water" leads the album off with a sudden burst of metalcore riffs and breakdowns with a catchy hard rock chorus. The band more or less adheres to this formula for the whole album; the songs have traditional rock song structures, with most having a breakdown in the bridge. While the similar structures could make the songs merely monotonous, they're saved by the strength of the individual parts. There are no lazy one-note breakdowns to be found here. Kellen McGregor serves up some of his tastiest guitar licks yet, while Jake Garland's drumming is as smooth and polished as ever and Cory Elder's sparse--but brilliantly placed--bass work settles perfectly into the band's groove. Vocally, Matty Mullins leans into the heavier sound of the band's earlier albums while retaining the experimentation found on Broken, from working in some yelling and pseudo-rapping on "Death Inside" and "Misery" to a well-chosen feature spot of AJ Channer (of secular rap metal band Fire from the Gods) on "Only Human".

One of the benefits of Misery's construction is that it stays remarkably free of filler. There are a couple similar-sounding tracks (compare, for instance, "Bleed Me Dry" and "Left for Dead"), but these are wisely separated in the track list. Each track has some small moment to keep it memorable. Despite some rather embarrassingly campy lyrics in the bridge, "Make Believe" leverages a tasteful synth lick and background vocals to remain an enjoyable metalcore ballad. It's the heaviest tracks that really stand out, though, with "The American Dream" emerging with an altogether satisfying breakdown and some well-chosen lyrics: "I wouldn't call this a victory / We pick sides and fight because we can't agree to disagree / You never wanna listen, you just speak / Light a match to the bridge but there's no difference between you and me..."

All that said, if you're already sick of the modern metalcore sound, Remade in Misery probably won't break the mold. Its musical strength keeps it from feeling recycled, but it isn't altogether a new sound, even for the band. But even though the album plays it stylistically safe, it works as the product of a veteran band that has perfected their trade. While it doesn't remake the band's sound, Remade in Misery stands tall as one of Memphis May Fire's best efforts.