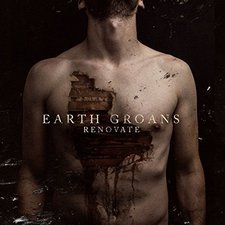 
South Dakota natives, and Solid State newcomers, Earth Groans are giving folks a small sample of what they have to offer with their 5-song EP Renovate. While South Dakota isn't known for its music scene, these far west mid-westerners haven't let that stop them. These guys play their music in the vein of Norma Jean and The Chariot: meaty and dissonant. While their brand of metal-infused hardcore isn't quite as chaotic as Scoggins' work with either band, there are certainly shades of that sound present here.

A scream over a blast beat kicks the EP off full-bore with "The Estate." The song settles into a steadier modern hardcore groove, but the tune just sounds heavier than your average hardcore track. The added guitar work in the breakdown really adds a lot of flavor into the mix. The music keeps pummeling and the growls keep coming as "Driving Out" starts. The musical back-and-forth between aggressively fast sections and more groove oriented hardcore moments give it a really nice touch. "Price Tag" keeps the heat coming with more brutal growls and screams. The listener also gets a nice taste of that Norma Jean/The Chariot influence here as well and is easily a favorite on the EP. "Price Tag" comes to an abrupt end and a soft hum plays for a bit before "Propaganda" jumps in, full steam ahead. The track is right at 4 minutes in length, but it almost feels like a piece with multiple movements given its structure. "Eclipse" closes the EP in strong fashion and is an equal rival with "Price Tag" for top track. More of that chaotic metal style comes into play and the guitar leads that complement the madness sound stellar. The chunky guitars and drums drop completely out of the track at the 3:15 mark to allow the guitar lead and screamed vocals to close the EP. This type of closing is fitting for an EP with this much energy from front to back and makes it seem like the band has "left it all out on the field," so to say.

Solid State has made an excellent discovery with Earth Groans, and Renovate is sure to grab the attention of many fans of heavy music -- especially those missing old school Norma Jean and The Chariot. They are far from a carbon copy of these bands, but the sound and influence is there. While it's easy to simply classify the EP as hardcore, there are so many other elements at play. Another thing that makes these guys hard not to love is vocalist Jeremy Schaeffer's mission for the band. Schaeffer says, "we want to be a ministry first, and a band second." Many times you can interpret that to mean that the band isn't very good, but with Earth Groans, that's simply not the case. Not only do you get a band capable of some insanely good music, but they have a heart for bringing people to our Lord and Savior. Metal fans should do themselves a favor and pick up Renovate immediately. This is easily the top heavy release of 2017 thus far, and it will be hard for another group to top it. One can only hope that a full-length album isn't too far behind.