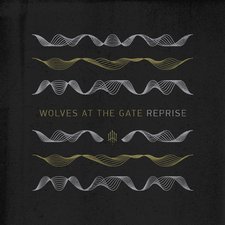 Wolves At The Gate
Reprise EP

Wolves at the Gate are already releasing an EP following last year's VxV. The group doesn't seem content to rest on their laurels and has released an EP every odd year (2011, 2013, and 2015) and full-length every even year (2012 and 2014) since joining Solid State. While 2013's Back to School was a brief covers EP, this newest edition to their growing catalog is an acoustic EP. Reprise is exactly what it sounds like. There are 5 reworked acoustic songs from previous albums (1 from Captors, 4 from VxV) and an additional new track. The twist to Reprise, however, is that each of the 5 reworked tracks features an artist from another band. The bands Being As An Ocean, Emery, For Today, Citizens & Saints, and Come Wind are all represented on the EP.

The opener is a Captors favorite in "Dead Man." The guys did a great job reimagining the song for acoustic guitar, but the EP never really gets better than its initial track. Toby Morrell joins in for "Relief," and while his vocal additions are as spot on as you would expect, the poppy feel of the song just doesn't quite work as a whole. "The Bird and the Snake" is nice, but sounds too close to the original to really be a worthy inclusion. The spoken word segment and some lyrics are dropped from the "The Father's Bargain." The lyrics, "No one can contain the power and depths of My abundant love" that are screamed in between the first two verses of the original are not present in this new version. More screamed lyrics from the album version are also absent later in the song. The acoustic rendition is nice, but it's just not as interesting on Reprise. "East to West" is the final previously released song. The track was an extremely powerful presence on VxV, and that same power translates nicely to acoustic. They also drop the spoken word section here, but it is easily the best song since the opening number. Finally, the EP closes with "Waste." Unfortunately, the only new tune present doesn't bring a whole lot to the table. It's a decent listen, but not a lot more.

Wolves at the Gate have the talent and ability to knock a record like this out of the park, but a listen or two through Reprise will have you wondering what could have been. There are definitely enjoyable moments and a track or two that really stand out, but it just feels a little underwhelming as a complete project. WatG fans will still want to check out some of their favorite songs done acoustically and those who have thought the band was too heavy for their taste can get a pleasant experience as well. If you're looking for a truly inspired acoustic experience though, the Jars of Clay or The Classic Crime releases from last year are a better place to look.

At one time, there was a funny trend among many Christian metal bands to write one or two polarizing soft songs on their otherwise harsh albums. (Demon Hunter is well known for doing this.) But I think Wolves At The Gate's Reprise EP is the first entirely acoustic album I've heard from a metal band. Those familiar with the group should only be delighted. Steve Cobucci's vocals are top-notch, and their lyrical and melodious writing is extremely professional. Reprise exemplifies these talents and solidifies their desire to be diverse. They are pushing the envelope of what it means to be a musician, and not just a "metal guitarist" (or drummer, or vocalist.)

On the back of honest music are elegantly mature lyrics that read like Jesus' New Testament texts at times, and like emotionally strained prayers at others. They never once sound corny or contrived. Reprise has a very singular, central theme: the sacrifice of Jesus. "The Father's Bargain" sums it up; "Father, I say such is my love and pity for all/There is a way for no condemnation on man to befall."

The first two tracks, "Dead Man" and "Relief" carry the album leagues, diving headlong into bright acoustic chords and upbeat lyrics. Nick Detty and his metal screams warm the bench this time around. Cobucci instead goes head to head with a variety of guest vocalists, including Emery's Toby Morrell, and Michael McGough from Being As An Ocean. The tracks translate from metal to acoustic exquisitely. Reprise is a fiercely hopeful album, and arguably the best music Wolves At The Gate have written. - Review date: 5/12/15, written by Wayne Reimer of Jesusfreakhideout.com

A hardcore band by trade, Wolves at the Gate is taking the opportunity this year to show their softer side with six acoustic songs on the Reprise EP. Wolves at the Gate has a style of hardcore that translates well into an acoustic form if need be, so Reprise is an almost effortless release, and it's pleasing to the ears. In an interesting twist, all of the not-new songs feature different guest vocalists that you may be familiar with depending on how far you've expanded your knowledge of Christian music. Emery's Toby Morrell adds his wonderful voice to "Relief," and "The Father's Bargain" gets an appearance from Zach Bolen of worship band Citizens & Saints. There is also vocal representation from Being As An Ocean's Michael McGough, For Today's Ryan Leitru, and Come Wind's Aaron Troyer. Overall, Reprise is a good listen, and more than one of these songs could probably be part of the worship service of a more unconventional church. Fans of the band, longtime or otherwise, may be interested in hearing what Wolves at the Gate cooked up here. - 5/5/15, Scott Fryberger of Jesusfreakhideout.com