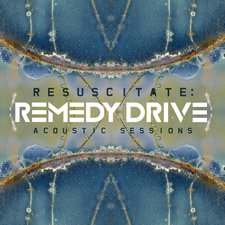 After releasing Resuscitate in 2012, Remedy Drive has decided to put an acoustic spin on the album. Bringing listeners and fans Resuscitate: The Acoustic Sessions--which contains all ten songs from Resuscitate completely re-recorded--Remedy Drive scales their album down a few notches, while still maintaining the integrity of the original recordings.

Due to the nature of their music, it seems that transposing their regular tracks into acoustic ones would flow almost seamlessly; they're still capable of providing a "full" sound on most tracks, and either version of the songs could be potential hits on CCM radio. On many of these songs, there isn't a ton of distinction between the original recording and the acoustic recording, except for the swapping of electric for acoustic guitars and lighter percussion on the songs. While these tunes sound good electric and acoustic, it may be too familiar and repetitive for listeners who purchased Resuscitate previously, while more guitar-driven tracks like "Resuscitate," "Glory," and "Make It Bright," provide the exception. On the acoustic versions, it's easier to distinguish vocal capabilities and harmonies that are sometimes overshadowed by the other instruments on the regular album. Also, it's interesting to note the arrangements regarding the original album vs. the acoustic one. For the acoustic versions, they obviously lack electric guitars, so Remedy Drive reworked the guitars and utilized other instruments, such as a heavier piano, to carry out some of the driving riffs that otherwise are filled by the electric guitar on the original studio recording. These different additions and switches help give some distinction to this acoustic project, and help the album stand on its own, apart from the record it spawned from.

If you're a die-hard Remedy Drive fan, just getting into their stuff, or simply looking for some new acoustic tunes to spice up your playlist, then Resuscitate: The Acoustic Sessions may be what you're looking for, but if you're on the fence about acoustic records, or already own Resuscitate and aren't completely over the moon with Remedy Drive, then you might want to pass on this one, or just check out your favorite tracks from Resuscitate and hold out until their next original release.