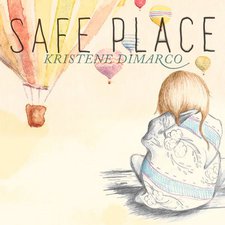 Among fans of worship music, Kingsway recording artist Kristene DiMarco (formerly Kristene Mueller) is probably better known as one of the vocalists and worship leaders for Redding, CA collective Jesus Culture and her contributions to their Hillsong style albums. Like many other musicians from similar church collectives, she's already branched out on some solo ventures of her own. Her second solo release, Safe Place, reveals a voice of her own that is nothing like the sound of her group efforts, but a charming pop worship album, with a light, almost folky acoustic pop style and songs that point heavenward while staying down to earth.

The contrast between Safe Place and Jesus Culture is worth noting, lest someone expect derivative church music and pass on this record. Everything about it, even her singing style, has a different tone and atmosphere. In her work with Jesus Culture, DiMarco takes on a passionate, dramatic style better suited for corporate worship, but here her singing are far more understated, recalling Sara Groves and Sarah Kelly in the softer moments and Hark the Herons, Tal & Acacia, and maybe a little Feist in her poppier songs. The music ranges from the bright, piano-based opener "Say Goodbye," to introspective acoustic folk in "This is How I Know," closing on a gentle piano and strings piece with "Hope."

What doesn't change is the vertical focus in her songwriting. On first listen, it certainly doesn't sound like a worship album, and many of these songs don't lend themselves to corporate singing, yet there is no denying where her heart belongs. "Safe Place," with its sparse melody and gentle vocal, invites the listener into worship and calls upon God to "come hold us secure... like a warm waterfall, wash over our wounds." It's a lovely song that could fit either in a church setting or a personal moment of worship. "Awaken," another gentle acoustic track, has a simple enough chorus that it could work as a worship song too: "If you want me, come and claim me... make me your own."

"Paint Me a Picture" provides an unusual twist as a song about the act of creating, a subject often discussed in creative Christian communities but not explored in song too much. In these words, she points all her music to the Creator of the universe: "You spoke to nothing and creation came / I'll look around and I'll do the same... You move me creatively / I love releasing what's inside of me." That creativity is most notable on tracks like "A Lonely Carpenter," where she wonders about the experiences and conversations with God that Jesus might have had alone in the wilderness or the evocative secret garden imagery in the verse of "Awaken."

This is a rather off-the-radar album that should please fans of soft and worshipful singer-songwriter music with an acoustic pop edge. She doesn't have the exciting bombast of a megachurch worship band, nor does she rely on the radio trends of the day. Safe Place is a lovely record that becomes more delightful with every listen, and it should help Kristene DiMarco's voice be discovered by a whole new audience.

Jesus Culture's Kristene DiMarco releases her sophomore project in Safe Place (her debut was released under her maiden name, Kristene Mueller, four years ago), a sometimes-intimate, sometimes-fun pop album that dares to exist outside of the usual mold that artists tend to take solace in in the worship music realm. Safe Place, while it possesses a musical vibe (and album cover artistic approach) that fits with its title, is ironically not a stylistic 'safe place' for the genre. DiMarco's solo style, apart from her Jesus Culture compadres, weaves a sonic scope that is inviting and lovely, bringing to mind similar artists like Sara Groves, Jars of Clay, and Sarah Kelly. Her vocals are warm and her lyrics pensive, which makes a fun opener like "Say Goodbye" a truly unique take on the Biblical idea of leaving everything to follow Jesus. The upbeat vibe slows just a bit for "Paint Me A Picture" and comes to a near hault for the ballad "Awaken." Most of Safe Place takes the listener to an intimate soundscape with a style that is polished but doesn't have that usual AC radio sheen that most Christian pop is given (often retaining more of a folk-pop approach). "Limitless" is another highlight, a coffee shop ready worship song about God's infinite character. The title track is another gem-- a minimalistic ballad prayerfully beckoning, "Dear Lord, come hold us secure, close to the safest place. Out of the storm, dear Lord, come. Like a warm waterfall wash over our wounds." DiMarco's Safe Place is a sweet musical surprise and quite easily one of the highlights of 2012's releases thus far. - 4/11/12, John DiBiase of Jesusfreakhideout.com