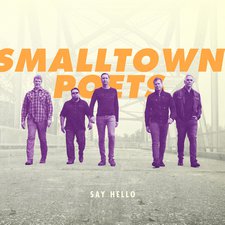 
Getting the band back together after a lengthy hiatus (in Smalltown Poets' case, 14 years between full-length, non-seasonal albums) is a dicey proposition many times. Most bands' finest works were born out of the momentum of the road and youthful energy, and the time in between can often blunt that songwriting edge.

Thankfully, in the case of Smalltown Poets' new album, Say Hello, the band (which includes all five original members) mostly succeeds in capturing the old fire of their 90's output. In fact, listening to Say Hello is a bit like taking a trip in the way-back machine, to a time when flannel was still the choice outfit of rockers and gritty pop rock was the order of the day.

The title track opens with lead singer Michael Johnston's distinctive tenor voice over a minor-key piano line, before the full band opens with a flourish that brings to mind groups such as the Wallflowers and The Gin Blossoms (two bands that serve both as contemporaries and band influences to this day). With a terrific mix of swirling Wurlitzer organ, piano and electric guitars, "Say Hello" is a great opener that drops several poetry references (among them, Alfred Lord Tennyson's famous "Charge Of The Light Brigade") and reintroduces the band well.

The following "Song Of Hallelujah" finds the Poets entering the worship music game with a heartfelt song of praise that melds a vertical subject with their trademark sound. This song is a particular treat in that it sounds just like the band's classic work, yet stretches them in new ways. To hear an original worship song with an honest sound in today's worship music climate is a rare thing, and ought to be celebrated.

First single "In The Middle Of A First Love" shimmers and chimes like something from vintage 60's era folk rock band The Byrds, and has great harmony vocals and a kind of audio crispness that will bring a smile to the face of longtime fans. "Let Me Love You" hearkens back to "If You'll Let Me Love You" from the self-titled debut album (still the Poets best work"), but slows down the tempo considerably for a poignant song about resting in God's love. The song pulls off the neat trick of referencing an older song's lyrics and melody in a new context. It's as if one side of the song shows the artist's youthful exuberance and the slowed-down, mellow version shows a veteran's wizened perspective on grace. It's an interesting experiment.

Alas, the back half of the record flags a bit in quality. The hymn-like "You're My Shepherd" is a song idea that never quite takes off, despite the fine vocal performance of Johnston and longtime band friend Mac Powell of Third Day. "Impossible" is a misfire of a vintage Soul Music tune, while "For The Ones Who Run" cranks up the volume and tempo, but becomes a bit of a repetitive and uninteresting rocker. Likewise, the ending "Like Home" and "Are You With Me" are well meaning, but float by without much impact.

But, for the first six songs, the old fire is back, and Smalltown Poets now have some momentum going forward for a new chapter in their story. It's good to hear this band again, and to dive into some "poetic" music once more.

Needless to say, the 1997 self-titled debut by the Georgia-bred quintet, Smalltown Poets, cut a very wide swath across the Christian music landscape, vaulting six of its eleven tracks into the Top 20 charts, moving nearly a quarter of a million units, garnering the band both Dove and Grammy award nominations, and going on to become the best-selling debut album of all time on the Forefront label. That being said, aside from that record and an equally-impressive sophomore outing, virtually none of the band's output between the third release and 2014's Christmas Time Again has managed to match either of the first two offerings in terms of energy or consistency.

To its credit, the fivesome's newest project is a refreshingly eclectic affair, touching on folk/pop ("Until I Met You"), classic gospel ("Like Home"), piano-based balladry (the Mac Powell duet, "You're My Shepherd"), worship ("Song of Hallelujah") and straight-ahead power pop ("For the Ones Who Run"). But, while front man Michael Johnston and his band mates are, by this time seasoned professionals, and the latest album is never less than appealing, it is more than a little telling that the last two abovementioned cuts - the ones which sound the most like the band's earliest singles - are far and away its most infectious and invigorating entries. Hardly a bad showing by any stretch of the imagination, the new release, like the five before it, still pales in comparison to the group's superior pair of inaugural efforts.
- Review date: 5/4/18, written by Bert Gangl

Smalltown Poets, one of my personal favorite Georgia bands, has returned again with their first full-length (non-Christmas) album since 2004's It's Later Than It's Ever Been. The band gives a nod to older fans with songs "Let Me Love You," "Until I Met You," and "For the Ones Who Run," introduce a new Poets' favorite in "Say Hello," and tag team with fellow Georgia native, and CCM legend, Mac Powell for "You're My Shepherd." While Say Hello falls a little short of the Poets' first two albums, it still exceeds expectations. This is a great starting place if you're thinking about looking into the Poets' back catalog and easily comes in as a top three album for the band. - 5/14/18 Michael Weaver