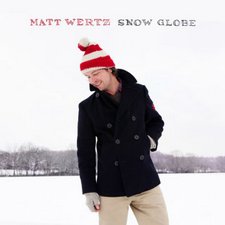 Singer-songwriter Matt Wertz is no stranger to the Nashville music scene. In a decade of music making, he has quietly built a strong fanbase with his easygoing style and heartfelt songwriting. Earlier this fall, he released his first Christmas record Snow Globe, a warm and playful collection of holiday standards and new songs that highlight the joyous splendor of the season. With Ben Shive at the production helm, the classic arrangements of these twelve songs are easy to enjoy as a holiday soundtrack, but diverse and layered enough to evoke the moods and colors of Christmas and reward repeated, closer listening.

Christmas records tend to take the serious, reverent path or lean toward the cheesy and sentimental, but Wertz takes a refreshing approach that is somehow both fresh and nostalgic. His singing is bright and buoyant, recalling artists like Dave Barnes, Jason Mraz, and John Mayer. Some vocal standouts are the cheerful and infectious single "Snow Globe," the jazzy sound of "White Christmas," and the intimate and subdued "Tennessee Christmas," a duet with Amy Grant that serves her original well. He is just as capable evoking a child's excitement with "Wake Up" as he is with the romantic ballad "Christmas in the City;" both songs appreciate the wonder from different perspectives.

As for the music, the standards get a classy pop treatment that doesn't stray too far from their original arrangements, while the originals pull out all kinds of rich instrumental depth to suit the mood of every song. Playful banjos highlight "Snow Globe," while an orchestra brightens up an instrumental version of "Sleigh Ride," complete with the whip cracks and horse whinnies simulated in the music. Other highlights are the peaceful solo piano in "Christmastime is Here," gentle strings and bass backing "Have Yourself a Merry Little Christmas," and his reverent yet unpretentious take on "O Holy Night." This record may be easy and fun listening, or even appropriate party background music, but a closer look reveals something that's rich and timeless.

If there is a word to sum up this record, perhaps "wonder" would be it. All the standard images are here: brightly lit trees, swirling snow, starry winter nights, and the warmth of loved ones, but Wertz handles them with elegance and sincerity. Some songs take on the fanciful side of Christmas, like "Snow Globe's" declaration "Sometimes I wish I lived in a snow globe," and others, like "Christmas in the City," reflect on how any place can be beautiful with loved ones nearby and a little holiday magic. On the closing track "Christmas Just Does This," he sums up this unashamed love for the season: "Sentimental some would say / But it's always been this way / And I'm shining like tinsel on a tree." Though this isn't a particularly spiritual Christmas album ("O Holy Night" is the only hymn featured), this intention to see an increasingly noisy, commercialized season with a child's heart instead of a cynic's scowl is refreshing, hopeful, and beautiful in itself.

Though Christmas is basically here, it's not too late to make Snow Globe a welcome addition to holiday traditions. It's fun and listenable as a soundtrack to gift wrapping and family gatherings, but it's rich and beautiful enough for a quiet evening enjoying a cup of cocoa in front of the tree. Matt Wertz's first venture into Christmas music is a solid and satisfying record for fans and new listeners alike.