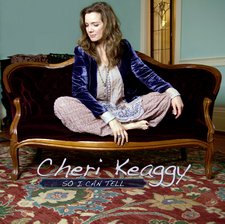 Cheri Keaggy
So I Can Tell


Those who only know of Cheri Keaggy only by way of her first few albums might well conclude that her 2012 effort is the work of a ghost artist or imposter. Early, Charlie Peacock-produced projects like the 1994 debut, Child of the Father, and My Faith Will Stay, which followed two years later, were filled with the same bright, melodic adult-contemporary-leaning pop that vaulted artists like Amy Grant and Kathy Trocolli onto the Billboard mainstream pop charts during the first few years of the 1990s. Her album So I Can Tell, on the other hand, is an entirely different animal altogether.

The opening title cut stirs together soul, blues, country and western, and pop power balladry - and tosses in a gospel choir for good measure - to create a song that's a bit hard to categorize, but far easier to love. "There Will Be One Day," by comparison, finds Keaggy turning in her finest Leslie Phillips vocal approximation atop a swelling, mid-tempo AC pop number that functions as a textbook example of tension and release. And the impeccably-constructed "When You Were Jesus to Me" is woven from the same thread as sophisticated 1960s Bacharach/Warwick standards like "Walk on By" and "What the World Needs Now."

Elsewhere, the nimble country/gospel vibe, Keaggy's decidedly Partonesque vocals, and ingratiatingly peppy rhythms of "Air, Food and Water" dovetail magnificently to form the perfect complement to the song's jubilant celebration of God's unwavering provision. In a perfect world, "Hello God" would have been a chart-topping duet with Lionel Richie during the early '80s. The mesmerizing piano-based balladry of "To Live Is Christ" matches any of Nicole Nordeman's finest works. And listeners wondering what the perfect fusion of country and pop would sound like need look no futher than the absolutely consummate "Starting a New Year Today."

As impressive as the above compositions are, their descriptions only go so far toward capturing the true depth and scope of Keaggy's latest offering. To be sure, the album's greatest strengths lies in the way in which it manages to sound a bit like everything and, yet, exactly like nothing at all. This sort of characterization shouldn't serve to put off the average listener. On the contrary, it is the record's very ability to simultaneously sound both familiar and distinctive that stands as its most potent asset. Easily Keaggy's strongest showing to date, So I Can Tell is an absolutely sublime work of unique and poignant beauty.