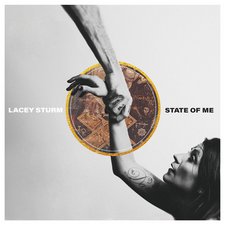 Lacey Sturm
State of Me - Single


Life Screams marked the beginning of Lacey Sturm's solo career. Filled with thoughtful hard rock anthems and heartfelt ballads, that album quickly became a highlight and proved that Lacey had not lost her edge after leaving Flyleaf. After returning in summer 2020 with her single "The Decree," Lacey Sturm is back again with another single, entitled "State of Me."

From the beginning, "State of Me" shows considerable Skillet influence, which isn't surprising considering that the song was co-written with John and Korey Cooper. It works quite well, giving the chorus a driving, anthemic punch without compromising Lacey's signature sound. The verses also see a bit of experimentation, as Lacey reaches down into her lower vocal range and allows the background vocals (provided by other members of the Sturm family) to shine through. Besides assisting with the background vocals, Lacey's husband Josh Sturm provides the guitar and bass, the latter of which is granted an attention that's rare in hard rock music. The bass has always played a central role in Lacey's music, and this song gives it plenty of spotlight, not only in the song's stripped-down sections but even in its heaviest moments.

From the anthemic, driving chorus to its fist-pumping ending, "State of Me" is an excellent hard rock song. While it'd be great to see a full-length album from her in the future, this song is certainly far more than we deserved. That said, it does make me wonder what could come next...