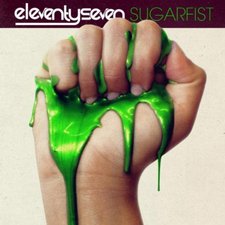 Earlier in the year, Eleventyseven started the year with the Quota EP, a strong six song endeavor that featured some of the best songs the band has ever offered. Sugarfist, the band's fourth full-length album, is a combination of seven new songs and all but one track off of the Quota EP (Eleventyseven's cover of "Take On Me"). Since I have previously dealt with the group's March release, I will primarily focus on the new songs on Sugarfist.

The Quota EP struck a nice balance when they brought catchy, electronically fused tunes to the table without resorting to the many annoying techno pop sounds which they employed in previous endeavors. The first song, "Wasted," flaunts a lot of guitar work which supplements a catchy tune and a particularly infectious chorus. "Ghost" is a solid synthpop song that relies heavily on background techno sounds, but, although the song stands out at first, it grows less interesting with every succeeding spin. On the other hand, "Give It Up" is a strong, rising pop rock song in the same vein of "Divers In A Hurricane" and "Book Of Secrets," only better. Both the dull "Silent Symphony" and the over produced balladry of "Suburban Love" lack the beats to make them catchy and the emotion to make them unforgettable. However, lead-singer Matt Langston does effectively infuse enough emotion in the contemplative "Lonely" to make it the most memorable album finale in the band's career. "Milk The Lighting" feels like the sequel to "Wasted," as the band delivers their mindless musing with lots of catchy angst.

At least two out of the seven new songs focus on girl/guy relationships ("Ghost" and "Suburban Love") and predictably don't offer any novel insights. Eleventyseven's rare burst of cynicism is directed toward churches on "Wasted," but they don't offer much in the way of helpful alternatives ("If you want it raise your hand/corporate churches worshipping a payment plan"). Both "Silent Symphony" and "Lonely" use spiritual metaphors, but the pronouns are a bit ambiguous. "Lonely" gives the most vivid insight into Matt's heart, but, in the context of the whole album, I'm not sure the lyrics "There's a phone ringing way up in Heaven/But they're screening all my calls/Sometimes I can't help feeling lonely/I can't help feel lonely/Even though I know/I know that I've got you" are obvious about the singer's relationship with his Savior.

If you take the seven new songs on Sugarfist and analyze them as an independent group, you would get a nice selection of fun, upbeat pop rock tunes with strong electronic influences and a couple of duds. When you combine the new songs with an impressive Quota EP, you have an above average album that is worth checking out even if you wrote off Eleventyseven after their sophomore work, Galactic Conquest. However, even though the band seems to get more comfortable with their sound with each progressing album, the low amounts of spiritual content should be considered before you invest in this green goo fest.