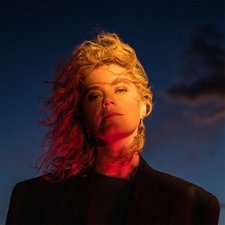 
Taya (Smith) Gaukrodger has been the voice behind some of the most world-renowned worship songs for nearly a decade. You would have first heard her angelic vocals on smash hit "Oceans (Where Feet May Fail)" which released in 2013. She also takes lead on Hillsong United recorded tunes "Touch the Sky" and "Whole Heart (Hold Me Now)," among others.

Now, in 2022, after several years of writing, Taya sets sail on her self-titled solo offering. With a little encouragement from United's leader Joel Houston, Taya looks to add her pen to her well-established voice. Her introduction is a first attempt at devotional worship-pop songs with production from fellow artist Jon Guerra. While the album as a whole is solid, it's definitely front-loaded with the most memorable tracks. She wisely chose her first three singles, and if you have liked each of them, you may appreciate the rest to a higher degree. However, I found there to be diminishing returns the longer the tracklisting worn on. A tight 10-11 song set would have crackled through to the end rather than slowly faded out.

"For All My Life" is my clear-cut favorite song, with its swaying gospel vibes, though the clarion call of ballad "Getaway" is a very close second. "For All My Life" is a call to surrender stating, "I won't lean on my own understanding/I will let go, follow, empty-handed/You say, 'Your yoke is easy'/You say, 'Your burden's light'/So I'll let You lead me for all my life." It comes across like a light and kind invitation, while it simultaneously sets your toes a-tappin'. "Getaway" reminds us to be real with God as Taya tenderly sings God's invitation to his children; "Are you burnt out on religious things?/Are you worn down, lacking inner peace?/Take a real rest, walk along with Me/In the pastures of My presence, you can be yourself." "In This Place," "All Eyes on You," and "Canticle" round out the biggest standouts, while the rest trend toward the more typical rhyme and verse of her worship contemporaries.

For now, Taya's self-titled is a good beginning point, and fans will find much to like. Taya could take a big step forward on subsequent releases by taking a few more sonic chances and trimming the fat from the tracklist. All in all, I'm glad she stepped out from the shadow of her longtime band mates, and the effort is worthy of attention for fans of modern worship.