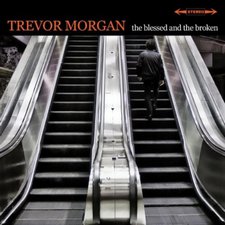 Trevor Morgan
The Blessed and the Broken

Real rock-n-roll is hard to find in current music whether you are searching in the secular or Christian music markets. So when a new artist or album that encompasses all things rock-n-roll enters the Christian market we take note. Singer/songwriter Trevor Morgan has been involved in the Christian and secular markets but has stayed primarily behind the scenes choosing to be a writer outside of the spotlight. But Morgan gained recent notoriety in the Christian market by being heavily involved with Mac Powell in the production and writing of the Americana/bluegrass influenced Glory Revealed I and II that garnered three Dove Awards. Trevor Morgan's new album, The Blessed and The Broken, is what rock should sound like, with bluesy guitar, irresistible hooks, soulful vocals, and with the hope of Christ at the center of it. The album was produced by Mac Powell and Jason Hoard and recorded at Third Day's new studio, The Quarry and Black Cat Studios in the Atlanta area.

The Blessed and The Broken comes out of the gate roaring with the Tom Petty style rocker "Easy" and never slows down after that. Melodies and harmonies seem to flow naturally from Morgan, such as the infectious, acoustic rock of "Everybody Needs Somebody." Morgan's distinct and incredible vocal range and honest songwriting are what set this release apart from other releases and the Powell/Hoard production team offers a warm, rootsy vibe to the record. The standout track on this album is soul-searching "Jesus Rides the Subway," which tells the story of Jesus going to those that are hurting and lost while not being recognized when He appears in church on Sunday. The song gives hope to a world of hurt that "We can lay our burdens down" at His feet. Edgy rocker "Love That Way" recalls comparisons to The Allman Brothers with furious bottleneck slide guitar work and transcending chorus, only with a better message.

Sometimes it is better to go straight to the Word of God for lyrics and Morgan does just that on the inspirational "Psalm 23" and softer number "The Light of the World." "Psalm 23" was featured on Glory Revealed II but has been dressed up on this release with drums, strings and pedal steel. Americana fused "Jericho" features a mandolin accompaniment and memorable chorus of "I'm just like Jericho, you're marching around, my defenses are tumbling down." Tracks like the worshipful "The Invitation" would fit into any corporate worship setting with its message of a Savior who has His arms open wide for "the blessed and the broken." A common theme throughout this album centers on the comfort and joy that can be found in Jesus, via encouraging anthems like "Jesus Never Let Me Down" and "All I See Is You." The southern twang of "I Know You" picks up the pace, laden with guitar hooks and enough "ooh's" and "aah's" to bring a smile to your face. The album ends with the folky "Hurricane," featuring finger-picking acoustic guitar backing Morgan's effortless vocal delivery with lyrics stretching to the throne of God.

Trevor Morgan's The Blessed and The Broken is eleven songs filled with a winning combo of acoustic rock goodness and Christ-focused lyrics.