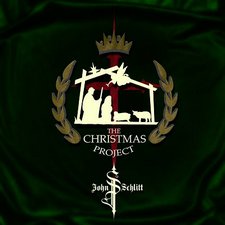 Christmas outings are, by their very nature, pretty dicey propositions. On the one hand, given that their material itself is almost inevitably tied to so many deeply-seated recollections of the average listener's holidays past, if an artist goes too far afield when rendering these dearly-beloved songs of yore, they stand in danger of running roughshod over the delicate sensibilities of all but the staunchest members of the fan base. By comparison, if a performer takes the opposite route and turns in a note-perfect collection of tracks with nary a wrinkle to separate the newly-laid-down cuts from their venerable original versions, the more fickle among the audience are quick to accuse him or her of phoning it in.

While it is debatable which method is inherently more risky, Petra front man John Schlitt, for the most part, has opted to take the latter route, hewing fairly faithfully to the renditions of these time-honored chestnuts most of us grew up with. That being said, what his first Noel-themed offering lacks in rhythmic and melodic left turns, it more than makes up for in terms of texture, dynamic and sheer variety. To be sure, the plucky Illinois native comes out swinging for the fence with nothing less than the "Hallelujah" chorus from Handel's Messiah. He then quickly follows that with something altogether different - a deliciously funk-infused acoustic/electric take on "Do You Hear What I Hear" that sounds like something like the boys from Extreme might have played as a warm-up before laying down tracks for any of their early '90s records. And the swirling, slightly dissonant "Little Drummer Boy" takes things in yet another entirely different direction; combining the most appealing aspects of, say, the London Symphony Orchestra and Led Zeppelin's "Kashmir."

As rousing as the first three entries are, the most convincing artistic statements arguably come by way of the album's softer material. "Good Christian Men Rejoice" offers up a winsome, hook-filled helping of sunshine pop (think the theme song to a '60s soft drink commercial) sure to bring a smile to all but the hardest-hearted of Scrooges. The iridescent, gently-loping "What Christmas Needs to Be," on the other hand, is likely as perfect a purely-pop ditty as Schlitt has ever offered to his audience. Contrast both of those cuts with "The Spirit of Christmas," which finds Schlitt trying his hand at, believe it or not, blue-eyed soul. While the slightly blues-tinged ballad probably won't have hordes of older listeners scurrying to toss out their LP copies of the superior Ray Charles-sung original, it nonetheless pulls down big points for the intrepid crooner for trying something a little bit different.

It probably goes without saying that long-time devotees hoping for a collection of nothing but out-and-out rockers will likely be surprised, if not a little offput, by The Christmas Project's frequently low-key character. Likewise, the mostly bare-bones production can sometimes lend the proceedings a certain demo-like quality. By and large, though, the release represents a near-perfect melding of old and new; retaining traces of the big, arena-ready sound of classic Petra while stripping away just enough of that era's characteristic bombast and gloss to station the whole affair, if not in the present day, at the very least somewhere very near the turn of the millennium. Perhaps the strongest selling point of Schlitt's most recent undertaking, though, is the way in which, even on made-for-stadiums numbers like "God Rest Ye Merry Gentlemen" and "The Hallelujah Chorus," his vocals are pushed far enough front in the mix to lend the proceedings a palpable, and decidedly welcome, sense of intimacy.

Of course, such a microscopic inspection of a given singer's pipes is usually less than completely desirable once said singer crosses the 60-year old mark. That being said, Schlitt's passionate, ever-sturdy voice arguably sounds as good as, if not better than, it did when he and his former band mates were crossing the country playing to packed concert halls and megachurches during the second half of the '80s. Indeed, as improbable as it might seem to those weaned on present-day artists who spring up seemingly overnight and disappear nearly as quickly as they came, Schlitt's new album finds him on the cusp of his fortieth year in the music business. Judging from the high quality of his latest release, it would seem that, just like true love and fond memories, the much-loved singer only gets better with time.