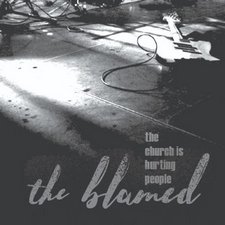 The Blamed
The Church Is Hurting People


There are quite a few Tooth & Nail alumni that, at this point, one could consider legendary: MxPx, Demon Hunter, Starflyer 59, and the list goes on. One such contender, based on an impressive, yet overlooked body of work, is the punk rock band The Blamed, who released a handful of well-loved albums with the label in the late '90s and early '00s. The band went inactive after 2002's Give Us Barabbas, but they have spent the last few years writing and recording new material, some of which ended up on a split EP with The Satire last year. Teaming up once again with Indie Vision Music for the release, The Blamed is now unleashing their first new full-length album in 17 years, The Church Is Hurting People.

Your relationship with Christianity and the Church will probably determine your initial reaction to such an album title. At first glance, it seems like a railing accusation toward the Church for causing pain in people's lives. And while that notion isn't entirely unfounded, the title's true meaning is revealed immediately in the opening track, "Hurting People Are Welcome Here," as vocalist Jeff Locke says, "The Church is hurting people, I am wounded and I go to church." He goes on to quote parts of the Beatitudes, and ends the track saying, "Love your neighbor like you love yourself, we are not libs, we are not cons, we are children of God, and these are our wounds." In a time that we're seeing a lot of believers moving away from their faith, and many bands that were once Christian renouncing their beliefs, it's refreshing to hear that The Blamed is as faithful to Jesus as ever. This manifests not only in the opener, but also in tracks like "We Are One and the Same," and the inviting "Speaking To A Cold Room of People Who Need Heat." Interestingly, the final track, "No Lights No Fog No Video Wall," closes the album with a group of believers singing a capella praises to the Lord in another language. It brings home the fact that we're all one in Christ.

In classic fashion, The Blamed fills out almost every track with a big, fat dose of fast and furious punk rock, proving almost from the get-go in "Overwhelming Love" that they haven't lost a step. They've also never been ones to shy away from a heavier sound, and The Church Is Hurting People is definitely no exception. Tracks like "Everytime I Win, I Lose" and "Speaking to a Cold Room of People Who Need Heat" border on hardcore, resembling the kind of sound you'd expect from a band signed to Facedown Records in the mid-'00s. This heavier, more chaotic sound is where I feel The Blamed really shines; it's hard to beat the intensity of songs like "We Are One and the Same" and "Then I'll See You In Hell." Although that's certainly no disrespect meant toward their "lighter" songs, "Still Waiting For You To Come Home" isn't a particularly strong song and "Victim Identification Please"--which features Jesse Ewan from the band Speed Babes--is a classic punk song that's also marginally creepy. It provides a nice reprieve relatively early on in the album, but only lets up for a few minutes before "Better Left Unsaid" beats the proverbial door back down.

I, for one, am glad The Blamed is back. In some ways, 2019 The Blamed is a different animal, as you can hear the 17-year difference in Locke's vocals, and the production is a bit more raw than before. But in a lot more ways, this is The Blamed you knew and loved. The Church Is Hurting People is a terrific reintroduction. It's available on CD, vinyl, and digital, so if you're a fan of the band or heavy punk rock, you've got plenty of options to choose from and not an excuse in sight.