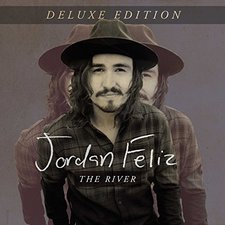 
The CCM world first heard from Jordan Feliz with his album Beloved in October of 2015. Since then, Jordan Feliz has been taking the Christian music scene by storm, and for good reason; not many artists can achieve a high level of encouragement and optimism with an authentic delivery, but backed with a soulful voice and rootsy pop sound, Jordan Feliz accomplishes just that. In 2016, Beloved was repackaged, a few songs were added and cut, and then we had a proper full-length release as The River. Now, a year later, Feliz's record label Centricity Music presents us with The River Deluxe Edition, which adds four remixes and one live track to the original 11-track album. This review will focus on the deluxe edition tracks--if you would like to read about the original album, you can check out Lucas Munachen's 4-star review here.

Releasing a deluxe edition for an album is a great opportunity for an artist to showcase B-sides, remixes, acoustic renditions, and alternate arrangements that may have not fit within the scope of the regular edition. To reduce the risk of looking like a marketing ploy, deluxe editions are usually best released alongside the regular edition (or as an anniversary edition). There are notable deluxe editions that have been released well after the original album, but given how easy it is today to release a digital EP or stream individual songs, it can come across as bad taste if they aren't done well nowadays. The disappointing news for this release is that it does not take full advantage of the opportunity. The good news is what we do have here is relatively enjoyable.

Not surprisingly, the best new track here is "The River" by remix guru Neon Feather (who has also done remixes for Colton Dixon, Britt Nicole, and TobyMac albums). The Neon Feather rendition of the Feliz's lead single gives the catchy original version an atmospheric vibe. It has a nice build from the verses and through the chorus, exploding into a fun synth sound in the post-chorus. It's a typical structure for a remix, but a pleasant listen nonetheless. "Beloved (NEVA Remix)" has a similar arrangement, but a less memorable execution. One thing that stands out about this rendition of "Beloved" is that it adds a guest rap from lesser-known hip/hop artist Joshua Luke Smith. It's a pretty solid rap, but feels a bit forced to add it to the bridge. Like the remix of "The River," "Never Gone Too Far (Isaiah Tejada Remix)" is a fun track, though it can be a bit repetitive at times. The final remix, "Satisfied," done by goodnewsbadnews, is a spacious song with a lot of reverb. Remixes of ballads are hard to pull off, and this one is done fairly well. The downside to these remixes is that they take away some of the best things about Jordan Feliz--his soulful and slightly rootsy sound. The deluxe edition concludes with a live version of "Best of Me," which communicates that Feliz makes a good transition from the studio to a live setting, but as a live track, it's pretty standard.

For those who have purchased the original album, the double-dipping will only be worth it to the most passionate of Jordan Feliz fans. "Dancing Through Fire" and "Rejoice" are songs that were left to the wayside in the transition from Beloved to The River; a reintroduction of those two songs would have been a welcomed addition. Even Jordan Feliz and David Dunn's cover of One Direction's "Drag Me Down" or Jarryd James' "Do You Remember" could have added value to this project. The tracks we do have here are certainly worth a listen (and perhaps would have been better suited as a remix EP), but packaging them as a re-release/deluxe edition feels a bit unnecessary. Despite this, The River Deluxe Edition is a good reminder of how strong of an impression Feliz left with The River.

Even here in the age of instant gratification where very few major-label acts are afforded the luxury of developing their particular musical identity slowly and deliberately over the span of more than a few albums, it is still unusual when an artist springs onto the scene, seemingly out of nowhere, with an effort as fully-formed and cohesive as Jordan Feliz's full-length debut. From the languishing folk of "Carry Your Troubles" and infectiously loping dance-pop of "Never too Far Gone," to the soul-inflected power balladry of "How Long" and the EDM-meets-pure-rock-and-roll vibe of the appropriately-titled "Best of Me," Feliz offers his listeners a veritable master class on how to deliver an eclectic, absolutely invigorating song set with -- as incredible as it might seem -- virtually no filler.

As most music aficionados know, it is a rare bird who doesn't follow any successful record with the inevitable expanded edition. And such is the case here as Feliz augments the original, 11-track, project with a quartet of remixes and a single live cut. As is true with so many deluxe editions, the additional material is a bit of a hit and miss proposition. The electronic embellishments that adorn "The River" and "Never Too Far Gone" place the reimagined songs in a different enough light from the originals to render the remixes both interesting and unique. Such is not the case, unfortunately, with "Satisfied" and "Beloved," both of which are similar enough to the original iterations to render the remixes, at best, superfluous. And the live version of "Best of Me," oddly enough, actually comes across as less energetic than its studio-crafted counterpart.

Of course, the preferred version of any of the repeated tracks will probably come down to a matter of preference. And, needless to say, with streaming music and digital downloads having all but replaced CD-based purchases, the expanded edition is hardly an all-or-nothing proposition since any one of the additional cuts can be listened to, owned or skipped over altogether at the listener's leisure. In their favor, the dance-inflected remixes of "The River" and "Never Too Far Gone" do highlight a side of Feliz's talent that he might be well advised to explore further the next time he enters the studio. By and large though, the expanded-edition comes down to a simple matter of too much of a good thing, with the original release still serving as the more coherent and convincing musical statement. - Review date: 6/20/17, written by Bert Gangl