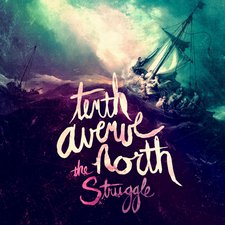 In Rembrandt's 1633 painting, The Storm on the Sea of Galilee, there appears to be fourteen men in the boat, while the Bible accounts for only thirteen in the actual event (Jesus plus his twelve disciples). As some painters tend to do, the Dutch artist often painted himself into his scenes, and it's widely believed that he is the fourteenth passenger; because Rembrandt saw everyone as applicable to these biblical stories, it's all the more an intimate picture of the everyday sinner in fear of his own life - he's just as scared as the Twelve. With this context, it's all the more fitting for the painting to be prominently featured on Tenth Avenue North's third studio album as a signed band, The Struggle.

When looked on as a whole, The Struggle broadens TAN's musical prowess in a mostly positive manner. While TAN's debut Over and Underneath majored on an appreciated, but overall rudimentary, pop rock base, 2010's The Light Meets the Dark gave far more promise of brilliance with a somewhat understated take on redemption's realities. While some areas of the record were more profound than others, TAN's efforts walked the tightrope between good and great. The Struggle has the benefit of an extra band member to create a more vivid picture with their composition, and while this isn't always exercised the best it could be ("You Do All Things Well" and "Lamb of God," unlike The Light Meets the Dark's serene and heartbreaking "Oh My Dear," both give the record a stunted and slow end the album doesn't deserve), the band has upped the ante with their potential, and tracks such as "Shadows," "Where Life Will Never Die," and "Hostage of Peace" are the most complete songs on the album. There's an extra level of mastery present here that the other records don't have, and it's in this way that The Struggle is a distinctively more practiced attempt from the quintet.

The overarching issue with The Struggle, however, is an incomplete picture of excellence. As some tracks display an uncharacteristic sound for the band and attempt to nail timely and convicting topics on the head, they often only succeed halfway in both areas. Using the lead single "Losing" as a case study, it starts off with a mix of handclaps, synths, and keyboard, giving the song a notable start, but as the bridge ramps up the song, things change to a gospel-style spiritual (complete with a background choir) that feels more forced than truly creative. "Losing" is meant to give both sympathy and stern warning to Christians battling between hateful and loving thoughts to unbelievers who wrong them ("It's only the dead that can live/but still I wrestle with this/to lose the pain that's mine/seventy times seven times/but Lord it doesn't feel right/for me to turn a blind eye"), but some lyrics are effective, and others feel too literal (or sometimes cliché) to consider very artistic in merit ("this is love, this is hate/we all have a choice to make/why do we think that hate's going to change their hearts/we're up in arms in wars that don't need to be fought"). Apply the same concept to tracks such as "Strangers Here," "Grace," and "Don't Stop the Madness," and The Struggle can, well, struggle.

In some ways, the straightforward lyrical method TAN employs gives no danger to misconstruing their tracks' meanings, but when the listener need not dig much, or at all, to find the gold underneath, the result is much less satisfying than the band intends. "Don't Stop the Madness," however, is the most lamentable case of this technique, as it gives light to slightly misguided theology. God only wants what's best for us, and sometimes that includes tragedy, but when Mike Donehey flat-out asks for anguish to make His presence known ("Don't stop the madness, don't stop the chaos, don't stop the pain surrounding me"), it's striking to hear this slippery slope. While Christians should be prepared to suffer for their faith, and sometimes it takes a calamity to wake them up to holiness, it is an erroneous approach to ask specifically for hardship to find His providence. The Lord both gives and takes away, and we must choose to encounter Him while He performs both of these actions.

In just four short years, Tenth Avenue North has rocketed themselves from a fledgling pop rock quartet to an experienced quintet ripe for radio appreciation. Still, TAN is at the standstill; while attempting new methods in their musical production, they've yet to climb out of the hole that is undesirable simplicity. While this simplicity isn't always a negative, it unrelentingly counteracts with the varied and complex musical structure they're expanding into. Until they can reconcile this disparity, records such as The Light Meets the Dark, and even more so The Struggle, will remain as missed opportunities for maximized greatness.

Returning to the album's cover, Rembrandt's masterpiece was stolen (along with twelve other works) in a 1990 museum heist and has never been recovered. Likewise, there's a masterpiece brimming with resounding interest from Tenth Avenue North that has yet to be found; The Struggle isn't quite it, but if the quintet makes conscious changes to improve their complexity across the board, TAN will reach the unheard height of their abilities. Little changes will go a long way to expand the band's appreciation from more listeners, and hopefully it will come sooner rather than later. Until then, The Struggle succeeds in encouraging any Christian in their walk, no matter how much they stray from the path of righteousness: "Hallelujah, we are free to struggle/we're not struggling to be free." Hallelujah, indeed!

Amidst the masses of up-and-coming CCM artists, few have gained the popularity that Tenth Avenue North has. With a solid debut, several radio hits to follow, and an equally successful sophomore release, the anticipation for their third album, The Struggle, has been high. Tenth Avenue North has a way of conveying the Christian faith honestly and beautifully, which is one of the reasons why Tenth Ave has done so well in their young career. Their third go-around is no exception; vocalist/songwriter Mike Donehey writes about the struggles that Christians face in the world of sin, and how he and the band deal with it.

Tenth Avenue North is certainly not known for loud and crazy instrumentals, but The Struggle is even more mellow and soft compared to their previous two albums. Tenth Ave takes a more relaxed approach this time around, with Donehey's vocals acquiring an almost jazz-y feel throughout the songs. The songs themselves attain the same lyrical quality that Tenth Ave is known for, but sometimes they come across a little trite and cliché, something that Tenth Ave has had a small issue with in the past. With song titles like "Lamb Of God," "Grace," and "You Do All Things Well," it's hard not to draw comparisons to other songs with either the same name or similar themes. Tenth Ave has never been "groundbreaking" or "daring" in what they do musically, but what they do compose is done well. Still, it'd be nice to see them push the envelope a little more in future endeavors.

Tenth Ave's third time around is definitely a charm, and while it's not the most innovative piece of music released in recent memory, it's heartfelt and earnest. The Struggle is definitely one of the highlight releases of the summer. - Cortney Warner, 8/8/12