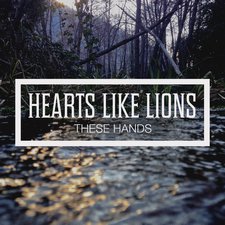 Before you ask, no, this isn't Aaron Gillespie. He didn't release an album for The Almost under a different name. It's actually Tooth & Nail Records' newest signee, Hearts Like Lions, a three-piece indie rock band from Long Beach, California. The similarities are hard to ignore though. The pacing, the song structure, and even lead vocalist Stephen Ramos' voice all bring Gillespie's work to mind. But that's meant to be more of a compliment than anything else. For a band that has only been around for three years, and with many different member lineups, the re-release of their debut EP, These Hands, is surprisingly mature and extremely polished. It sounds more like a second or third album.

The EP starts out with "Wake Up," which serves as not only a perfect introduction to the band and their sound, but also as a call to the masses. It's very reflective, yet mellow; subtle, yet powerful. And lyrically, it leaves no question as to where the band's loyalties lie. It's all about decisions and the effect they have on our lives. Ramos, with the sincerity and concern of a friend, and the authority of a great revival leader, calls for the listener to "Wake up from this deadly sleep. Wake up from this deadly sleep." The deadly sleep is sin, and living our life apart from Christ. Unlike most of our society today, he isn't satisfied with himself, or the accomplishments of man. He doesn't tell the listener that everything we do is right. Instead, he calls the listener out and points them toward truth; "I'm sick and tired of these people talking about where they've been. I'm sick and tired of these people living like they don't want anything to do with Him." What a statement. It's raw, it's real, and that can be said for the rest of the album as well.

While the pace may change, and the instruments vary, the message stays strong throughout. It's especially evident on the title track, "These Hands," as Ramos laments, "I've done so much destruction. So much destruction." With the type of humility so often lacking these days, he admits that he doesn't deserve God's love, and that there's nothing he can do to change that. Instead, he cries out to God that, "These hands are dirty. Won't you make them clean?" Honesty like that makes this album so easy to relate to. The members of Hearts Like Lions aren't rock stars, they're people. They've just been given a gift, and they want to share it with the world.

Hearts Like Lions may be a relatively new band, but the bar has been set high. Very high, in fact. These Hands is almost painfully short, but if it's any indication, Ramos and company are certainly up to the challenge. In a music scene with cookie cutter worship bands where originality dies on the production floor, Hearts Like Lions is a bright spot of hope. Sure, you may hear similarities to bands like The Almost, or even From Indian Lakes, but don't let that stop you from enjoying one of the most interesting albums of the year.

Hearts Like Lions is an indie/alternative band from California that recently signed to Tooth and Nail records. Their latest EP, These Hands, sounds exactly like what you'd expect from a good Tooth and Nail band. The EP isn't mind-blowingly original, or even the best in its genre, but the quality is there. From the opening moments of "Wake Up" to the fading out at the end of "These Hands," the EP provides an enjoyable listening experience from front to back. This three piece band is more than competent and offers up some tasty tunes. Hearts Like Lions is sure to remind you of several Tooth and Nail bands, but perhaps the one that comes to mind the most is The Almost. Undoubtedly, there are definitely some musical similarities; the biggest comparison could be made with the voice of singer Stephen Ramos and Aaron Gillespie. These Hands is a nice introduction to the band, but something just seems to be missing overall. Tracks like "Stranger" and "Trust Me" should certainly have you paying attention to what the band does next. While Hearts Like Lions' Tooth and Nail debut gets somewhat lost in the mix of some really solid material put out by the label this year (i.e. Kings Kaleidoscope, Copeland, and newcomer Artifex Pereo), they have still recorded something more than worthy of a listen. - Review date: 12/18/14, Michael Weaver