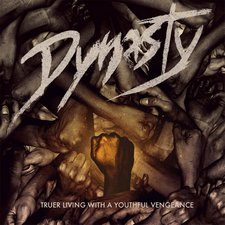 The LA hardcore scene will never die. The whole genre is steeped so high in brotherhood and "old school" mentality that I don't expect to ever see a shut tap on new hardcore artists. So here we have another within the proud ranks: Dynasty. Heard of them? Probably not. Despite six years of working the west coast, they've only now been picked up by Facedown's boot camp division, Strike First. And they've bestowed us with a 22 minute ensemble of what I'm afraid is their best work, Truer Living With A Youthful Vengeance -- for now at least.

It's a quick listen and could have just as easily been called an EP. Oh, but wait, there are 10 tracks?! Everything about this album is hardcore purist. They don't take the term lightly, like so many metalcore, post-hardcore, punk, heavy metal outfits throwing the term around like it applies to everything with breakdowns. No, this stuff is legit! The riffs are chunky, the beats are two-step hungry, the yells are as monotone as you can get, and hokey dina! there's gang vocals everywhere! Perfect. It's everything you need for a good establishment shake-up. They'd make Madball proud.

There's one tiny little problem though that I have to go over: the performance is kind of lousy. It's a shame, really. The passion is there; it's palpable. But there are just no commendable performances to pick out. On the guitars we have routine chord progression. That's it; nothing else to be said. The drums are, quite frankly, abysmal. Various times we hear already unmotivated fills fall flat and otherwise nothing exciting ever bounces off those sticks. Considering the usual hardcore vocal style and monotone yells, the best I can say for the vocalist is that he isn't horrible. The occasional lower register growl/yell is squeezed out of him when the energy is high, if he hasn't wind himself with an overly long mouthful; there's just no creativity here. Why should we listen to Dynasty when we already have Call To Preserve? (And Terror, and Trapped Under Ice, and about a thousand other hardcore bands who all sound similar already.)

The high point of Truer Living... is the lyrics, as with a lot of Christian bands. So it's a perk, but it's a given, so it doesn't save them. Nevertheless, they've got their act together spiritually, "The cross before me, the world behind me, no longer bound, I'm freedom found." "I believe in the risen one. I believe in His hope." Every song on the album has a great message, but mostly it centers on the call for truth in our young generation, "Don't waste your breath unless you speak the truth." I'll tell you why the kids should listen to Dynasty: because these guys are actually trying to make an impact with their music. They don't waste a single word.

Truer Living With A Youthful Vengeance hearkens back to the simpler days when a band's first album wasn't expected to be perfect. It seems to me that somewhere between the beginning and midpoint of the previous decade, bands have either gotten universally more ambitious, or label's standards have been raised. By now, cause and effect could dictate both.

So what we have here in Truer Living... is an honest mess, with real passion and no-holds-barred faith-filled lyrics, but unfortunately a sub-par performance. But what are you going to do? They're just getting their voice out there and Strike First was gracious enough to be their medium.

Dynasty may have set the record for the shortest album with the longest title on their Strike First debut release. Truer Living With a Youthful Vengeance clocks in at just over 22 minutes. To answer your question, "No, this is not an EP." Truer Living... is a fast-paced, full-length, 10-track outing. Already the album faces its first major detractor; you'd really love to see a "full-length" album make at least 30 minutes in length. Musically, the album is old and refreshing all at the same time. While the sound is nowhere close to new and is no more than a copy of what has been done for years (i.e.: Madball or Trapped Under Ice), it is nice to hear a "hardcore band" play true hardcore music. Dynasty brings straight forward L.A. hardcore punk ferocity to the table and not the breakdown overkill "metal" that bands are claiming as hardcore today. It's also nice to see Strike First get back to the roots of Facedown Records with the true hardcore brand.

As with any Facedown or Strike First release, spiritual lyrics are found at the forefront of Truer Living. In the end, Dynasty brings a pretty good sound back to what has felt like a lost genre. While there is room for much improvement in the musical performance, hardcore fans should pay attention to Dynasty. If they continue working on their craft, and find a way to add an extra 15 minutes or so of music to an album, they may be a band to be reckoned with in the future. - Michael Weaver, 6/2/11