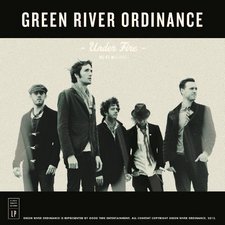 Texas' Green River Ordinance is a band with compelling music and an equally compelling story. Signed by Virgin Records and releasing an album of well received pop-rock a few years ago, in the vein of Matchbox Twenty and the Goo Goo Dolls, the band walked away from the deal to go out on their own and call the shots, including embracing issues like human trafficking and the recovery of the Gulf Coast from the BP oil spill two summers ago.

All of this would just be an interesting side note if the music on Under Fire were not compelling, and (spoiler alert), it is.

Lead singer Josh Jenkins has a soulful, southern twang that brings to mind Needtobreathe's Bear Rinehart and the band's surging guitar sound, reminiscent of Switchfoot, anchors opening track "Dark Night." Current single, "Heart Of Me," hits with rapid fire vocals and presents the tale of a girl whose love "is moving through the heart of me." Songs of romance have been a standard in music for as long as people have been picking up instruments to sing and write, but recently, in pop music and top 40 radio, romance has given way to songs celebrating the physical pleasure side of relationships. It's refreshing to hear songs like "Heart Of Me," and closing number "Dancing Shoes" (with its sweet country swing and wheezing harmonica), that celebrate the simple joy of dancing with your love (and it scores points for its reference to country artist Emmylou Harris). "San Antone" is one of those great geographical songs that sounds like it might have been covered by Johnny Cash on one of his final albums.

But better than romantic love is God's love, and this divine love is celebrated in the album's best moment, "Resting Hour." Handclaps, Hammond B3 organ and acoustic guitars anchor this worshipful tune about the need for an escape in this exhausting world. The gospel choir in the build-up brings the song to another level, and this tune would make a wonderful addition to a gospel church's Sunday morning rotation.

Funding the record themselves through Kickstarter allowed Green River Ordinance to throw everything into the skillet over the course of fifteen songs; the country music influences, the modern guitar rock, the worship element and cook up a gumbo that is just right. That makes for a great story indeed.

For any bands wondering how to write a radio-friendly tune that could be used as a single, their first call should be to the GRO guys, who have included 15 on this release. Admittedly, that can be taken as both a compliment and a criticism. On the one hand, it's almost impossible to hate the band's latest album, Under Fire. Each and every song is catchy, simple and fine-tuned. On the other hand, the album isn't exactly memorable. Oftentimes, it feels like the guys are on the verge of greatness with a particular piece, but instead decide to play it safe and just stick with the formula that has worked before. The second half of the album isn't quite as guilty of this as the first, with a trio of entries that drift into the indie-folk genre. On one of these tracks, "San Antone," the sudden country twang is a bit awkward at first, but ends up working within the confines of the song. Complaints aside, the worst songs on Under Fire are all still pretty good jams. Considering that along with the hearty serving of tracks and GRO's dedication to charitable causes, Under Fire is worth a listen. - Jerold Wallace, 2/25/13