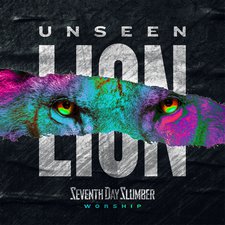 
Seventh Day Slumber has been in the rock and worship industry for quite some time. Back in 2009, they released their first rock-infused worship record, titled Take Everything. Despite sticking in the worship genre for a few years, the band hasnt released a pure worship album since 2013. Seven years later, they finally find themselves producing it once again, with a 5-track EP, titled Unseen: The Lion. While this project was originally going to be a 10-song album, they decided to split it into two EPs, as Unseen: The Lamb will be released later this year.

The rocking Lion And The Lamb kicks things off on a solid note, as the band delivers a great rendition of the song. Eternity slows things down, and is the only original tune on the record. It tackles the subject of trying to hear God's voice through all the chaos, with lyrics such as Looking for flashing signs and wonders / Looking for saviors on our screen / You are a God who speaks in whispers / Echoing through eternity.

The group then proceeds to cover Reckless Love, which follows in the same vein as the opening track. Considering the amount of times this song has been covered, it certainly seems a little redundant of SDS to put their own spin on it. With that being said, the band asked their fans which songs they wanted to hear on this album, and Reckless Love was requested by many. Covers of the popular Oceans and Holy Spirit close things out, as the group effectively changes the sound enough to be different from the original compositions.

At the end of the day, fans of Seventh Day Slumbers worship endeavors will find plenty to enjoy here. While the band would have benefitted from picking some less popular songs to cover, this EP has some of the strongest worship material they've produced yet. With the addition of Weston Evans on the guitar, their sound is elevated to another level that would not have been reached without him. If youre a fan of SDS, or just looking for some worship music to rock out to, Unseen: The Lion is something youll want to give a spin.