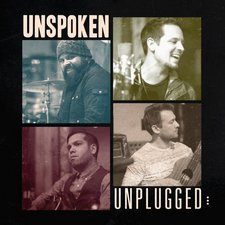 
Unspoken has been around since 2003, but their big break came in 2012 with their first national release--a modest five song EP, entitled Get To Me. Since then, the four-piece band has released one project per year, each displaying traces of creative growth. Unplugged maintains that upward trend with five re-imagined favorites and five brand new recordings. This album may be more "plugged in" than the title suggests, but it's not an unfitting name as it finds the pop/rock outfit trading their radio-ready pop sensibilities for a less polished sound.

The boot-stomping "Broken Man" starts the album on a high note with a casual tone, textured instrumentation, and honest lyrics. That same sturdy and soulful vibe continues with "Start a Fire" and "Who You Are"--the latter of which is an album highlight with its bluesy electric guitar and jazzy piano breakdown. Things get more experimental with "Good Fight," largely due to an intriguing tension between the electronic beat in the verses and a full drum kit in the chorus. This fun tune serves as an anthem for believers to "keep fighting the good fight" outlined in 1 Timothy 6:12.

Though almost all of these tracks are solid tunes, they are held back ever so slightly by safe execution, particularly in the lyrics. "Lift My Life Up" is the prime example of this with its predictable songwriting and an excessive emphasis on rhyming. Even still, the song is an improvement of the original as it trades lackluster power chords for intricate acoustic guitar picking. Contrasting this weaker moment is the closing ballad "Solid Rock," which is the band's most vulnerable and emotional song to date. The simplistic piano and string backdrop fosters a worshipful setting as lead singer Chad Mattson sings about embracing suffering as an important part of God's plan to draw us closer to Himself.

Unspoken's Unplugged is more than a nice alliteration; it displays a band capable of carving a niche for themselves in a crowded genre. If you are already a fan, then grabbing a copy of Unplugged is a no-brainer. If you are new to Unspoken, or even if you wrote them off in the past, Unplugged is worth checking out.