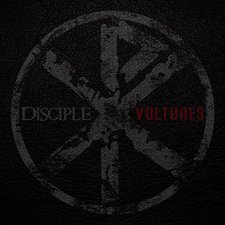 
With roots back to 1992, it's been a long journey for Disciple, with many lineup and label changes, but the band's ability to rock your socks off while proclaiming the name of Jesus has remained a constant. With their impressive independently-released Attack last year, the band has proven they are just as relevant and bold as ever. In the wake of the chaos of Attack lay several B-sides that didn't make the final cut for the album. Vultures scavenge these leftovers, making a strong six-song EP.

"Sayonara" immediately delivers the gritty hard rock sound and poignant lyrics we know and love about the band. The song will have you singing sayonara to your sinful habits and poisonous relationships in no time. "Snooze" is a satirical piece about an important person in Kevin's life who has left him heartbroken over empty promises: "You came to me, and you took my hand, and you wiped my rivers dry / Do you remember that night / Well me neither." Instead of losing sleep over his disappointment, he takes the higher road: "I could never thank you enough for teaching me how just to treat the ones I love / and just be there." "Awakening" and "More" keep the heaviness coming with the former highlighting Kevin's commanding voice as he sings/screams through the verses and soars with clean vocals in the chorus. It's little details like Joey West's tight drum fills between the second verse and the second chorus that turn a good rock song into a great one.

Just when you wonder if this EP is only comprised of hard rock songs, the soft acoustic guitar strumming of "Bring The Dead To Life" puts your hopes (or fears) to rest. This pain-tinged song offers a vulnerable setting for someone to recognize the hope they can find in Jesus. It's a nice tune that fits right in with the equally predictable radio-ready cuts "Yesterday Is Over" and "The Right Time" from Attack. Closing the EP on a spine-tingling note, "Breaking Down" is a slow building piano ballad which only gets more emotional as the song progresses. As Kevin powerfully sings the third and final chorus, "I am breaking down / God I need you now / Can you put me back together," his feelings of agony and faith are almost tangible.

The only drawback to Vultures is that it doesn't have distinguished characteristics that made Attack stand out, such as the vocals of former member Jason Wilkes or the subtle nods to Back Again in the verses of "Radical." Not that the absence of these particular qualities inherently makes the EP any less stellar, but the lack of any specific characteristics can make these songs blend with much of Disciple's recent three albums.

Like Attack, all the elements that make a high caliber rock album are present on Vultures. The four heavier tunes serve meaty guitar riffs and in-your-face lyrics seasoned with heavy breakdowns and throat-wrenching screams while the two slower songs are emotionally gripping. It's also nice to see these tunes not fall through the cracks like the B-sides for Horseshoes and Handgrenades did only being released with the pre-order of that album. When a band's "cast away" B-sides are just as solid as the ones that made the final album, you know the band is doing something right.