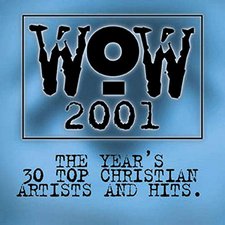 WOW 2001 was the sixth installment in the annual WOW collections, with all the previous installments reaching either a platinum or double platinum status. With a series this successful, this album was almost guaranteed to be a best-seller (which it did go on to be double-platinum selling). In regard to the quality of the collection's song selection, would it continue to carry on the trend of more variety among genres (as seen in WOW 1999 and WOW 2000)?

On the previous few WOW collections, the first disc seemed to be like a milder Seltzer compilation and the second disc was full of adult contemporary songs. The previous order of the discs was switched on this collection, which I personally think was a much better idea (seeing as though having dessert after dinner is better, even if the dinner is enjoyable--metaphorically speaking).

The first disc gets to an upbeat start with Steven Curtis Chapman's massive hit song, "Dive." Similar to the second disc of WOW 1999, there are many slow songs present (such as "This is Your Time," "Crystal Clear," and "Free"), but thankfully they are better dispersed with more upbeat songs placed at reasonably consistent intervals that keep the disc from dragging. Like I said before, this issue is also improved by the placement of faster, edgier songs on the second disc. Even though this disc contains many slower songs, they certainly aren't bad songs. One song that seems strangely misplaced is Salvador's "Lord, I Come Before You." It does end the album on an explosive note, but certainly seems more fitting for the next disc.

This is certainly not a bad collection, but some more variety on the second disc would have made this a much better edition of WOW. The music videos, WOW Flash information, and free CD offer were probably great bonus features for the early owners of this album (back in 2000), but these things either no longer exist or lack much of a purpose almost two decades later.