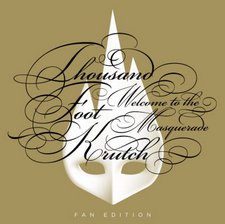 After experiencing major success from one of their most cohesive releases to date, Thousand Foot Krutch has spawn several variations of their record, Welcome To The Masquerade. With a live CD/DVD released just a few months before, TFK rereleased Masquerade as a "Fan Edition." Via their website and other social media outlets, TFK told their fans that if they preordered the "Fan Edition" of Masquerade and sent in pictures of them wearing the "flame mask," they would be featured in the album artwork. After several hundred preorders and self-pictures later, Thousand Foot Krutch released Welcome To The Masquerade: Fan Edition.

The "Fan Edition" includes three new tracks, along with the thirteen on the original release. The concepts of these tracks fit in almost flawlessly; any of these would have fit in fairly well with the rest of the album. "Shook," the first of the new songs, is a moderate rocker where vocalist Trevor McNevan sings about how crazy life can get. "Shook" is definitely not as pretentious as most of the songs on Masquerade, but there is a nice acoustic breakdown towards the end. The second new track is "Take It Out On Me," and while it's a little more upbeat than "Shook," it's another mellow rock song. McNevan tells the listener that he's here to help, and to "take it out on him" if they need to, whether that's their frustration, pain, or confusion. The third and final song is "Anyone Else," and was originally written by McNevan for Daughtry's new record, but he ultimately ended up keeping it for TFK. On the surface, it appears to be a love song, but, as with many TFK songs, it could be interpreted several different ways. The song is about a relationship that's falling apart that he's trying to salvage; whether that's God or a friend is left undefined. This is the only song that feels a little out of place on here, because it doesn't quite fit the overall theme featured on Welcome To The Masquerade.