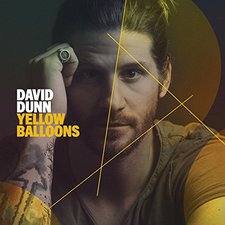 
Tragedy can be a catalyst for creativity, especially in the music world. Steven Curtis Chapman recorded his album Beauty Will Rise after the death of his youngest daughter. Hillary Scott penned her hit song "Thy Will" after suffering a miscarriage. Jason Gray's album Where the Light Gets In was written while he was going through a divorce. When enduring painful trials, musicians can use the gift God gave them to work through their hurt, express their frustration or confusion, and sometimes reach out to help others going through the same experience. Singer-songwriter David Dunn channeled his grief into creating his latest effort, Yellow Balloons. However, he doesn't give this impression for most of the album--in fact, one would think the album is as fanciful and fun as its title suggests, until the final track comes and changes the perspective of everything the listener just heard.

The release opens with a quirky guitar riff and a clap-along beat as the opener, "Kingdom," commences. This catchy track is a mover-and-groover, and though it relies on a basic melody, it's the kind of song you can imagine being sung to open a youth conference. The lyrics reinforce the idea that the Kingdom of Heaven is not this lofty, far-off place, but rather in us, echoing the words of Jesus in Luke 17:21. "Kingdom" isn't the only song on this record about heaven--album highlight "Vacation," a gorgeous, piano-driven ballad, expresses a desire to be away from the chaos of the world and in the presence of God: "I wanna go where the clocks all stand still / To get away from the heat and the uphill / Where all the work is through / And all I need is You..."

Another theme on this album is the desire to return to God, to childhood, or to better times. Funky, acoustic-based "History" ponders what the world would be like if Adam and Eve had not given in to temptation, asking questions like "Would we know that we were satisfied / If we never understood that the other side / Of harmony is an anarchy where the world is full of sin?" "Open Arms" encourages the listener that when we have fallen into confusion and sin, we can still run back into the arms of God. Believers going through a dry season in their walk will relate to the radio-friendly lead single "I Wanna Go Back," in which Dunn reminisces on the uncomplicated faith he had as a child.

The album rides the tide of encouraging, uplifting tracks and catches the listener off guard when we finally reach the closer--the title track, "Yellow Balloons." The song begins with the melancholic sound of slow, clean guitar strums. Dunn softly asks "God, what were You doing here?" As he continues, we find out that "the world just got darker, 'cause a little light went out" and when we reach the chorus, we learned that a special little girl passed away: "So, we'll cry on her birthdays, as days turn to years..." The titular yellow balloons are mentioned as they are released into the sky, a tradition for a child's memorial service. Upon further research, this reviewer learned that Dunn wrote this track in memory of his niece, Moriah, who passed away in 2015. The song closes the album in an achingly beautiful way, leaving the listener with much more perspective on the album as a whole.

Yellow Balloons is an encouraging and solid record, albeit not the most musically innovative one. The words here outshine the music--the lyrics are pensive, honest, and at times heartbreaking, and Dunn's vocal delivery is smooth as honey. Unfortunately, the melodies are pretty standard, especially on the up-tempo tracks. Even so, the album boasts relevant and uplifting messages, and drives home how precious our earthly and eternal lives are. This reason alone is enough to take a look at Yellow Balloons.