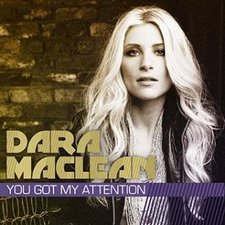 Dara Maclean
You Got My Attention

For Fort Worth, Texas singer and songwriter Dara Maclean, music has never been about anything other than ministry. At the age of eight, Maclean discovered a passion for music that led to leading worship and performing for the church, and she later released several independent albums under the name Dara Joy. As the newest member of the Fervent Records roster, Dara Maclean introduces her music to a new set of fans with her debut You Got My Attention, twelve summer-ready songs with a worshiper's heart.

Maclean's soul-infused pop style recalls the spirit of Motown with a dose of funk. Citing Lauryn Hill's The Miseducation of Lauryn Hill as her textbook on how to write Scripture to funky music, she also channels a bit of her contemporaries Adele, Natasha Bedingfield, and Ray LaMontague, whether belting out big vocals or turning the volume down for hushed, intimate songs. One can't help but think of her labelmate Francesca Battistelli; both share Ian Eskelin as producer, and both have the big voice and fun personality to pull off songs that fit comfortably between playful and serious, and. Like Battistelli's debut, You Got My Attention shifts easily between styles to show off Maclean's musical depth and range.

The lead single "Suitcases" has already introduced her easygoing soul-pop side to Christian radio. Beginning with a soft piano intro and Maclean's gentle crooning, it builds into a strong song with a memorable hook: "You can't run when you're holding suitcases / It's another day; throw away your mistakes." The clever word images and encouraging message are infectious, and it leads the way to the most vintage sound on the record in "You Got My Attention." Jazzy horns, a gospel choir, and a classic melody awaken the 60s soul diva in her for a cool retro vibe that's a perfect fit for her powerful voice.

She's not all pop and flash though. "What Love Looks Like" is a sweet acoustic tune with a singable melody, "Free" has a heavy piano beat that gives the song a unique edge, and "So Good to Me" is a welcome reprise of Maclean's classic style, only at a gentler pace than the rousing title track. While it sounds all over the place sometimes, the album is actually a great representation of who she is and a homage to the many inspirations that brought her music to life in the first place.

One major influence that cannot be overlooked is her focus on music as ministry. As one who always played her songs to and for the church, there's no mistake that her music would feature straightforward lyrics with some worshipful tunes in the mix. This mostly works, but occasionally the lyrics can drift a little too close to CCM clichés. For example, "Nothin' You Won't Do," while soulful and fun, sticks out for a chorus that declares, "if I was the only one here on the planet, You would still send Your son/ because You couldn't stand to see me anywhere but next to You," not really offering a fresh perspective on a message used in many songs and sermons before. "Gratitude" has a fantastic intro, but falls into the heavy, loud worship sound that has been done many times over. Many listeners will welcome this sort of lyric and resonate, but some may find themselves hoping for something a little bit deeper.

Maclean's debut is great, retro fun that will brighten summer soundtracks and bring another fresh female presence to the industry, a welcome and timely one considering Francesca Battistelli's rise over the past few years. Fans of Battistelli's debut or those looking for a different spin on Christian pop will enjoy getting to know Dara Maclean and find her debut well worth their attention. It's not flawless, but it is a solid, fun record and shows lots of potential for this young artist's future.