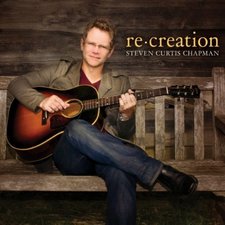 It's a new chapter in the career of CCM legend Steven Curtis Chapman. His last studio outing, Beauty Will Rise, was a lovely, bittersweet collection of songs that were born out of the heartache spawned from the loss of the Chapmans' adopted daughter Maria a few years before. The album was a tough but rewarding listen (especially for those familiar with loss), and musically the project kept things more organic to truly channel the emotion Chapman was conveying. With his latest offering, re:creation, Steven Curtis not only debuts six brand new songs, but he reworks and reimagines eight classic SCC tunes, including "The Great Adventure" and "For The Sake Of The Call." The concept gives the album very much of a hits compilation feel, and since there is anything but a shortage of such projects for Steven's career, re:creation is a unique approach with refreshing results.

The entire album is approached from an acoustic viewpoint and the final product should appease longtime fans as well as fans of more folk-based pop music. Most of the "re-created" classic songs are wonderful updates, but longtime listeners who have an attachment to the originals might not embrace each one with open arms. Some songs are given a greater face-lift than others, like "Dive (Deeper)" which takes the upbeat anthemic pop rock song and gives it a moody toning down, complete with a horrifically intrusive, hyperactive flute that dances through the intro and chorus. Similarly, "Heaven In The Real World" is stripped back, but the presence of a speedy finger-picking banjo towards the song's finale seems a bit out of place, especially when it's otherwise a softer moment. But the songs that receive the greatest refreshment are the ones that have originals that would probably be considered pretty dated in 2011. "More To This Life" and "For The Sake Of The Call" are the real gems considering how both were conceived over twenty years ago. It's tough to say whether any of the "re-creations" are better than their originals, but again, that may also depend on how attached to the original one may be. Personally, I enjoyed almost all of the updates (except "Dive"), so as a means of revisiting and refreshing fan favorites, re:creation works really well. I suppose one could view these versions as what they may sound like today if Steven were to have written them at this point in his life. At the same time, these could also be viewed as strictly "acoustic versions" of their original counterparts, but the fact that all six of the new tracks carry a similar feel to the "re-creations" supports the idea that these are rediscoveries of these songs. These versions are also a bit more layered and textured than standard "acoustic versions."

The new songs are great compliments to the "re-creations." The sound is more acoustic than his last pop rock album, This Moment, but abundantly more upbeat and characteristic of his usual style than Beauty Will Rise. "Do Everything" should be an instant favorite among SCC followers; it's got a little bit of a "Live Out Loud" feel while it keeps that acoustic foundation as Chapman sings about living our lives for Christ's glory, no matter how mundane our lives may seem to be. "Long Way Home" is a fun little ukulele-driven tune with a sandy beach flavor that talks about the life on earth just being a journey to our true destination in Heaven. "All That's Left" is a highlight which is primarily acoustic but mixes in an electric guitar as well. This song was inspired by words that Steven's son Caleb had spoken at Maria's memorial and serves as a touching anthem. "Meant To Be" was oiriginally heard on the VeggieTales' episode It's a Meaningful Life last fall and is a great anthem for living life to the fullest. The final new tracks, "Morning Has Broken (featuring Caleb Chapman)" and "Sing Hallelujah," work together as one song (especially since both are pretty short, but one kind of continues into the other). The first part is a cover of the beloved hymn, while the second part is a rousing finale that is an original of Chapman's to wrap everything in a hopeful finish.

The idea of re-imagining his classics has been on this singer/songwriter's mind for years now (at least, he did mention it to us in our 2007 interview), so it's great to see it come to fruition on re:creation. The positives of this release outweigh any negatives as the new songs are wonderful additions to the talented artist's catalog and the updates of the older, now dated songs are a nice touch. At times, it may feel like you're listening to two different albums or an SCC collection on shuffle (and in a way, you are), but re-creation is an appropriate follow-up to Beauty Will Rise and should be an excellent segue into whatever Steven Curtis should decide to pursue next in his inspiring music career.