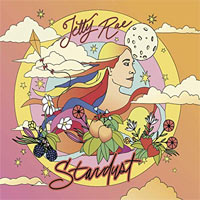 
Lullaby albums from established Christian artists have popped up with a noted frequency in recent years. It makes sense that, given Christianity is very family-oriented, there is a ready and willing market for this kind of product. Such an album is not new territory for indie vet Jetty Rae, who previously released La La Lu and the Lazy Moon back in 2011. Now, on the heels of 2017's Can't Curse the Free comes her second lullaby project, Stardust (not to be confused with the Willie Nelson album of the same title). This 9-song offering was crowd-funded and recorded entirely in the back of Rae's travel trailer while visiting a National Park, which is about as indie and grassroots as an artist can get.

Six of the tracks are original to Rae with three unlikely covers. The album can also be split into two halves of four tracks while the closer, "Seasons Lament," acts as a tie between the different aspects of what came before. The first four songs are more story-based and tend toward a trippy, dream-like experience. "Animal Fair" is a humorous account of mishaps at the zoo set to a slow, playful tempo. The title track takes the experience of pretending you're in a spaceship to new heights and is soothing enough to put the wildest child to sleep. The first cover, "Let's Go Fly a Kite," is timely with a Mary Poppins movie recently in theaters, but also seems at first glance like an odd choice for a lullaby record. Rae makes it work, however, stripping the song down enough to be calming without losing its playfulness. "Sophia" tells the story of a little girl with magical singing powers and is the weakest song of the bunch as it feels like it drags on when it doesn't even hit the four minute mark.

The second half shifts its focus away from storytelling to more of the parent-child relationship. This is noticeable in "Honestly," in which a parent sings tender devotion to her baby. "You Raise Me Up" comes next and serves as another pleasant surprise cover. Again, Rae strips back any bombast that other artists have employed with the song and, with very simple instrumentation, manages to capture the hope and intensity of the lyrics. "Strawberry Cream Peaches Delight" is another fun tune that compares a child to a variety of desserts (probably best to skip this song if your sweet tooth is tempting you). "I Got You Babe" completes the trifecta of unlikely and yet effective covers. In the context of a lullaby album, the song takes on a different perspective. It's not about two lovers anymore; it becomes a parent singing to her child. Combining the two themes is "Seasons Lament," written for Rae's son who was grieving his grandpa's death. While told with picture-book imagery, it also serves as a word of comfort to her son. As such, it is the highlight of the record and works as a poignant closer for a lullaby album, giving a lesson in life and death while conveying it with child-like lyrics.

Although this sort of album is becoming more prevalent, Jetty Rae's Stardust stands out above the rest. She brings a certain charm and different perspective to the genre. In many ways, this record is like a good children's movie that has plenty for the young ones to enjoy while lobbing some nuggets out for the adults to grasp. At times, the lyrics and music may combine to make the experience a little too trippy, and Rae's airy vocals get lost in the stratosphere a little too often. But on the whole, Stardust is worthy of being in any parent's (or non-parent's) collection.