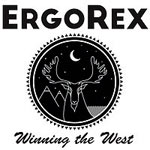 Ergo Rex has been making their brand of rock music for about half a decade now, starting with a 2010 album called The Risk of Tragedy. It had a lot of promise, but was ultimately underwhelming. Their follow-up album, Breathe in the Roar was a step in the right direction, and that trend continues with their 2015 EP, Winning the West. The fourpiece is in full creative force and has presented their best work yet.

Ergo Rex finds themselves on the more creative side of the spectrum this time around, and it shows from the very beginning. "Empires of Venus" features some atmospheric guitar licks, but also bears a resemblance to the one-album wonder Strange Occurrence. The song sounds other-worldly, as lead vocalist Preston Carmack lets his dreams pour out into the lyrics, as he does occasionally throughout the EP. "East of the Sun, West of the Moon" is a little more vague: it's an encouraging song ("Little birdy you're brave, you're a lion in a feather suit"), but it's not readily apparent where the band is referring to in the titular line "I know a place where we can run, east of the sun, west of the moon." However, a little crypticism isn't necessarily a bad thing. On the other hand, "cryptic" is the last word I would use for the following track, "A Swiftly Tilting Planet," which is directly aimed at the devil. Ergo Rex calls him out in the mild rocker, reminding him that, when our Lord Jesus comes back, he will be held accountable for all the evil in the world, and that he can't hide from it.

"Majestic 12" seems to be the only weak spot on Winning the West; I do enjoy some of the rockier aspects, but it also seems as if the band was crawling through the shadow of bands like Red and Kutless and Thousand Foot Krutch and picking up inspiration along the way. The idea is solid, but the end result is weak, and it doesn't really fit well with the other five songs. Fortunately, the clear cut highlight of the EP comes up next, "The Man With The Morning In His Eyes." I adore the tranquil waters of the verses, and the melody and falsetto in the chorus are simply moving and comforting. Ultimately, the song deals with the loss of a loved one, but the it focuses more on the wonderful legacy left behind as opposed to the grief often associated with death. "Whisper and Roar" brings the EP to a close, focusing on the Lord and His love. From loneliness and despair and begging God for forgiveness, to responding to God's invitation to spend time in prayer, it's an honest and heartfelt song that is a perfect way to cap it all off.

After lending my ear to all of Ergo Rex's past albums, it's become clear that these guys have found themselves. In an age of the music industry where high quality bands are finding it easier and more tempting to sell out for fame and money, it's a breath of fresh air to come across a band that is actively seeking to improve their craft. Kudos to Ergo Rex for never giving up on becoming the best band they can be, and for releasing a solid and surprisingly - albeit relatively - experimental album. Check out Winning the West (which is currently free on their website!), and hopefully you'll enjoy it as well.