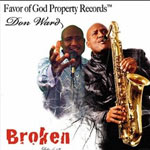 Don Ward is a musician who has worked with quite a few big names in the music industry. He's either played with or recorded music for artists like Olivia Newton-John, Journey, CeCe Winans, Eddie Money and more. He's also a Grammy-nominated artist who has recently released his own solo album, entitled Broken, which explores some of his gospel stylings as well as a good portion of jazz. It's easy listening that makes for good background music, especially during quiet times with God. Broken is a pretty simple album as far as lyrics go, with an upfront message that doesn't require the listener to dig too much to get something out of it. This is great for listeners who don't necessarily need something deep to get into, but can become a deterrent to those who appreciate the artistry of words and lyrics. However, with somewhere around half of Broken being of a more instrumental nature, the simplicity of the lyrics doesn't really downplay the album too much. You may want to give Don Ward's Broken a listen if you want something relaxing and something easy to worship to.