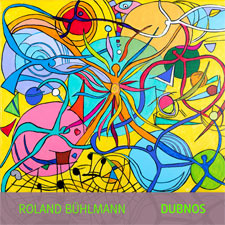 
Hailing from the country of Switzerland, Roland Bühlmann is a multi-instrumentalist who will use even non-musical objects to bring his music to life. On his 2020 instrumental album Dubnos, Bühlmann used not only traditional rock instruments, but also branches, oil tanks, stones, vases, and wrenches to produce his brand of industrial-infused indie rock music. It's a unique method of songwriting that gives way to some very interesting moments on the album. In particular, "Dubnos" and "Ubiquitous" are two of the album's stronger offerings, with some terrific instrumentation and melody, but the whole album is full of creativity and strong songwriting and musicianship. The issue I have, though, is that the tracks are long (six tracks range from 6:17 to 11:56), and though the music is constructed very well, none of them seem to warrant the length. The interesting ideas in each track tend to play out within a few minutes, which makes them a little more difficult to finish. However, it is clear that Roland Bühlmann is otherwise excellent at what he does, and I can easily recommend this album for those who enjoy industrial indie rock and don't mind longer track lengths.
- Review date: 2/3/22, written by Scott Fryberger of Jesusfreakhideout.com