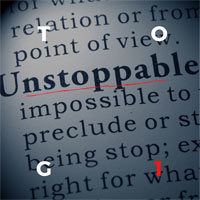 
New to Christian music, but not the music industry itself, mysterious hip-hop/trance/dance artist Tool of God One has reset his aim from a mainstream audience to that of inspiring believers to be useful for God's service. After giving up on a music career at one point, the San Diego native's passion was reignited to motivate and inspire all Christians to answer their calling. This newfound purpose resulted in a song called "Rock On" in 2020, and his newest track titled, "God's Unstoppable" here in 2021. This tune is a less-than-two-minute adrenaline-junkie fist-pumping dance song that would be at home on many an action movie soundtrack. It's a decent track that suffers slightly from some redundancy, though it's saved by its wisely chosen short runtime. If you're in the need of a new workout song, then "God's Unstoppable" may just be the tune for you.
- Review date: 4/17/21, written by Josh Balogh of Jesusfreakhideout.com