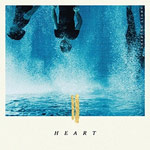 Australia is home to many worship bands and artists, with Hillsong likely being the biggest of them all. Leading Light (members were formally part of the C3 Church Newcastle City) is another one of those bands and they're releasing their debut album, Heart, this fall. The band state on the website that they are believing for something better and bringing light into dark places with their music. All-in-all, Heart is pretty much what you'd expect from a modern worship album with nothing really pulling Leading Light ahead of the masses. That's not to discount the album, or to say there aren't any enjoyable moments present, though. One of the higher points on the album is the second track, "Pure Praise." The title is a bit uninspired, but the music is beautiful and the vocals are also very nice. Another album favorite is easily "Altar" and it's probably the best song from a musical composition stand point. "Strongest Place" likely offers the best vocal performance, but the acoustic guitar strumming in "Lift My Eyes" lends a much needed break from the constant timing effects from the guitar used in other songs. While there are certainly bright spots, there are also some detractors. The first would be the overall length of the project. The shortest song is 5:10, while the longest is 14:02 -- this provides a one hour and eight minute run time for a ten track album. When you couple these long run times with the fact that most of the songs are in the same tempo range, the album can start to feel like one long song that goes on for too long. While the production is solid throughout, the opener, "Song of Breakthrough," feels out of place right at the beginning. The timing feels a little off in a couple of sections, and Erika's beautiful voice isn't showcased as nicely here as it is in other songs. However, the tune gets much stronger at the end. If you're looking for something that really stands out with your next worship album, Leading Light's Heart may not be the best place to look. The group is in it for Jesus and clearly have a heart for worship. Their goal is for the listener to become completely immersed in the worship experience and not just individual songs. This could explain some of my complaints about songs blending together and may give some listeners exactly what they are looking for with a worship album. Any fan of worship music should give this one a try and decide for themselves. I'd definitely recommend Heart for personal worship time over recreation for a congregational worship setting. - Review date: 8/31/16, written by Michael Weaver of Jesusfreakhideout.com