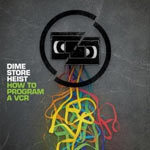 Dime Store Heist
How To Program A VCR

While the days of great ska have, for the most part, died, there are still bands around that are trying to keep the genre alive. The Mighty Mighty Bosstones are apparently working on a new record, and Reel Big Fish has been a staple of the Vans Warped Tour for years now. Last year, Indie Vision Music released a free compilation called Ska Lives, with a sequel having dropped this summer. The compilation featured a mix of good, bad and decent ska bands. Among them were well-known bands like Five Iron Frenzy and The O.C. Supertones, as well as bands you may not be familiar with, such as The Waffle Stompers and Dime Store Heist. The latter of which released a full-length album in 2010 called How To Program A VCR, which was a surprisingly good effort from the group. Overall, the production work is pretty solid, and the music is good old fashioned ska that makes you want to get up and skank the day away. While the majority of ska is pretty self-explanatory as far as sound goes, a couple of good comparisons to Dime Store Heist would be Sublime and The O.C. Supertones. The title track even offers a bit of Five Iron Frenzy in the chorus. I do like what Dime Store Heist has to offer on How To Program A VCR, and the guys are obviously talented musicians, but I think they display a tendency to fall into the shadows of some of the aforementioned, bigger name ska bands. They even end the album with some silly rambling in the hidden track at the end, a la the Supertones. So while they are talented, and How To Program A VCR is a fairly good ska album, I can't help but hear other bands that came in and did it before these guys. However, don't let that stop you from listening to this if you're a ska fan. Dime Store Heist is one of the few bands that is doing a good job of keeping ska in some sort of living state.