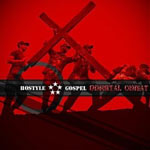 Back in 2003, there was a hip hop group by the name of The Elite M.O.C. (Men of Christ) who was called to minister in central Illinois. When they moved on to other aspects of ministry, two members - Proverb and King Soloman - continued on in the hip hop world under the new name Hostyle Gospel. With the addition of Big Job, Hostyle Gospel became a three-man hip hop crew bent on bringing the gospel through what they call dynamic Christian hip hop. Their 2011 full-length release is a generous, and kind of ehausting, 21-track album called Immortal Combat (a play on the extremely popular - and gory - game series, Mortal Kombat, which they do reference in their album, like when one of the rappers says "Lord, finish me" in "Comin' Back Again"). The majority of the style of Immortal Combat shows a side of Hostyle Gospel that very much resembles artists from Reach and Cross Movement Records. Influence from Lecrae, Tedashii and Flame are very apparent throughout a good portion of the album, with maybe a dash of The Tonic. As you get further in (somewhere around the last five or six tracks), you can still hear the influence from those artists, but you can also expect a bit of dirty south, along the lines of Pettidee (mostly in the vocals). The production is pretty solid for a group of independent artists, but when compared to the artists they're most likely trying to emulate, it's not up to the same standard. The emcees are a talented bunch, with good timing and flows, which end up being the biggest draw for Immortal Combat. Most of the music is well-done too, but it doesn't make a bigger impact than the rapping. Now, as for the negative aspects, the first (and smallest) is that, even with the talent of the emcees, some of the rapping is a little sloppy, like in the quickness of "King Soloman's Letter." It's rare, but not completely nonexistent. The main weakness is that Hostyle Gospel throws in some really gimmicky stuff that turns out more annoying than entertaining. The hook of "Tell A Story" is just some obnoxious laughter followed by someone saying "tell a story." Hooks like those found in "Got My 'C' Up" and "Get Yo' Bible Out!" are repetitive, cheesy and really just bring the track down more than anything else. "Got My 'C' Up" would be an alright track if I could just listen to it and skip over the unnecessary hook, but since it's there, it's not as good as it could've been. In addition, the 75-minute length is a bit daunting, especially when none of it really stands out that much, but mainly just feels like an attempt at creating sounds that have already been created by people that, honestly, have done it better. Hostyle Gospel is talented and will probably impact the Kingdom of God powerfully in their local hip hop community. I would like to see more originality, as I can see that they have the potential to make something they can really call their own. This and slightly better production may be the only things separating them from taking their sound and message to a wider audience.