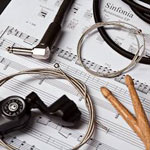 Instrumental band Sinfonia has an ambitious goal to fuse the techniques of the Classical Period with modern rock, and it is quite an interesting concoction. The band's Renaissance EP opens with "Nor'Easter," which is characterized by gritty guitar riffs, dynamic drumming, and a smooth baseline. Though there is plenty of musical variation throughout the song, at 10 minutes running time it extends its welcome a bit. The following track, "Dark Dream" is just as much of a roller coaster ride as its predecessor, but it is more focused, resulting in an engaging listen. The two best tracks on the EP, however, come in the middle of the album with "Machine" and "Quirina Soler." Loaded with shredding guitar riffs and tight drum fills, these two songs are raw, full of energy and ridiculously catchy. Contrasting these highlights, "With No Regret" has an awkwardly screechy guitar at certain points, and meanders too aimlessly in others. Similarly, the six-minute bass solo, "Reinvention," has some intriguing moments, but it would have been stronger if it was cut shorter. The final song is a remix of "With No Regret" that fares better than the original, boasting a grungy synth that sounds like it came right off Road Rash from Sega Genesis. Even with a couple weaker tracks, the Renaissance EP is a solid introduction for a band with a lot of potential. If instrumental symphonic rock piques your interest, go give Sinfonia a listen. - Review date: 8/28/15, written by Christopher Smith of Jesusfreakhideout.com