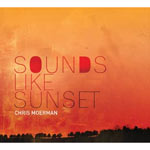 Having spent his younger years playing with different bands in his hometown of Adelaide, Australia, worship leader Chris Moerman only saw his first release in 2008. His second official release, and first full-length is called Sounds Like Sunset, and features production from former producers of both John Mark McMillan and Norma Jean. It's quite the difference in sound. Moerman's music is definitely on the McMillan side of the spectrum, however. Sounds Like Sunset features some ready-for-radio worship songs whose sound will instantly capture the ears of fans of Hillsong, Chris Tomlin and Casting Crowns. The production sounds nice and crisp, and Moerman shows some talent, but overall there's nothing that really sticks out. All the songs are nearly just carbon copies of previous worship anthems you can hear on any Christian hit radio station. "Heaven Taking Earth" is your standard triumphant worship song, while album closer "Sins of Our Fathers" is the slow ballad that picks up at the end for a semi-strong closing moment. I wouldn't be surprised to come across his material on the charts at some point, given that it's very accessible. But it doesn't offer much to someone looking for depth in their music choices. Check out Sounds Like Sunset if you're looking for some new worship songs.