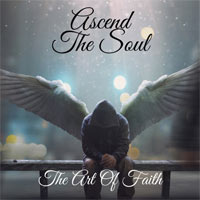 Ascend The Soul
The Art Of Faith


Earlier this year, hard rock/metal outfit Ascend the Soul released a song called "Leap Of Faith," the first single from their then-upcoming album, The Art of Faith. The song showed us a band that was promising, if not pretty rough around the edges. Now, the full album has arrived, and unfortunately, it doesn't build upon the stronger aspects of the single. One can definitely hear instances of potential goodness, but overall, the album is significantly brought down by an all-around lack of production. Vocals and instruments are often out of tune, the volume changes inexplicably, the vocals are majorly unappealing (both cleans and screaming), and there's a general sense of dissonance. There are even moments where you can hear something brushing against a microphone that wasn't edited out of the final product. The Art of Faith comes across as the demo of a new band trying to get their sound figured out as they work on a proper debut. But as a sophomore album, it's a bit puzzling. If a third album is in the future of Ascend the Soul, I would highly recommend they take some time to nail their sound and hire a quality producer to help with the problem areas.
- Review date: 6/19/21, written by Scott Fryberger of Jesusfreakhideout.com