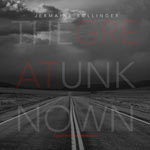 A former worship leader at several churches in his home state of Illinois, singer/songwriter Jermaine Bollinger took the leap that many in his shoes do: Bollinger stepped into the music industry as a full-time artist. With no shortage of albums, his frequency of releasing new material certainly solidifies the "full-time" status; his latest album, The Great Unknown is his third album in 2016 alone (second full-length). Boasting eleven tracks that are tailor-made for radio and youth group worship sets, The Great Unknown is everything you've come to expect from a young, modern day worship band. The one thing here that's not typical of bands like this is the vocals, as the tone and vibrato of Bollinger's voice leads me to believe that he may have been inspired by a number of 80s hair band vocalists. In fact, at some points, Bollinger's voice seems to overpower the music, which is, unfortunately, a rather common power pop rock that has a difficult time separating itself from the over-saturated market.

Despite the commonplace feel of the music, Bollinger and his band do display some musical talent. Though the album may be a bit overproduced, all the instruments seem to be handled by some accomplished musicians who deserve all the credit they get. The main point where I feel the band struggles is in the lyrics. Almost all of the songs are vertically-based worship songs, which is great, but they lack depth. For example, look at the chorus of "Free Fall," which says, "I'm in a free fall, fighting the war between answers and trusting Thee, praying for Your solution, rescue me, wrecked with anxiety, attacked by the enemy, filled me with disillusion." Another example is in the song "Enemy," where Bollinger sings to Satan, "Get behind me, you're nothing but the enemy, set out to enslave me, your joy is to hate me, don't define me, you don't know my identity, to trust you is gravely insane, oh I must refrain, your attempts, they won't destroy me, no your tactics won't employ me." Though Bollinger and his band are album-producing juggernauts, weak lyrics like these and standardized pop rock really take away from what the band has done right. A focus on stronger songwriting and experimentation with the music could lead Jermaine Bollinger and his band to becoming truly great in the industry.